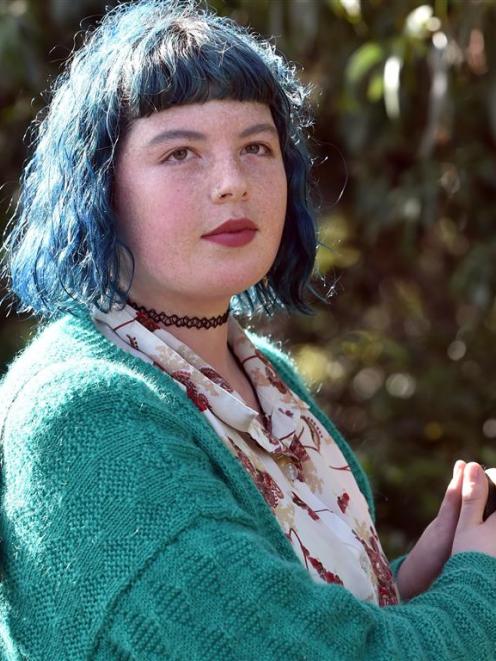 Third-year University of Otago student Mikayla Cahill, who was walking with a group of friends when they were harassed by a drunk man near the Dunedin Botanic Garden on Saturday night. Photo by Peter McIntosh.
Harassment in the student quarter has reached breaking point, and the University of Otago and students' association need to do something about it, a group of Dunedin residents says.

Otago bioethics PhD candidate Emma Tumilty co-signed a letter with 10 other people who live and work in the area, calling on university vice-chancellor Prof Harlene Hayne to act.

"This is not another letter about couch burning or broken glass, or piles of vomit in the street,'' the letter, sent yesterday, reads.

"I'm afraid it is much more serious.''

The problem, the letter says, is an "unacceptable and insidious'' level of harassment in the student quarter, including "racist speech/slurs, street harassment towards women and trans and homophobia''.

Not all students contributed to the problem, the letter writers acknowledged, but the problem was real.

"Aside from physical destruction,'' Mrs Tumilty said yesterday, "what upsets us most was this aggression towards others, [towards] women, or people who are slightly different - hurling bottles and abuse at people as they pass.''

She was in her car with her dog in Albany St when a van of young people pulled up next to her.

She had already begun avoiding the main streets of "student- ville'' for fear of abuse, but did not expect that kind of abuse on the road.

Mikayla Cahill, a third-year student, had also been harassed in the student quarter on several occasions.

The most recent was while walking home from the last gig of O Week, near the Dunedin Botanic Garden.

"We walked past there; there was a group of 12-13 people, and they were all crowding around one of their friends, and he was swearing,'' she said.

She recalled several other incidents where she had been targeted by aggressive people in the student area, including having bottles thrown at her in Castle St.

The harassment and abuse affected her and if she heard a group of more than two men walking behind her, "my heart will skip a beat if I hear them walk faster''.

Detective Senior Sergeant Kallum Croudis acknowledged there was a constant stream of "complaints about criminal behaviour of a sexual nature'' in Dunedin, and a "small spike'' during O Week.

"We haven't always got it right ... and now, our position is let's get in and have a look at it in every case, before we put it to the side.''

He knew not all incidents were reported to police, and acknowledged the issue of harassment needed to be talked about more.

"I applaud anyone that's bringing sexual violence out into places that people talk about it.''

She responded to Mrs Tumilty in a matter of hours, saying she had "no tolerance whatsoever for this kind of behaviour''.

The university, she wrote, was working on developing "two educational programmes for Otago students'' - one for students in residential colleges that would begin next semester, and another that would start next year, as part of the Orientation education programme.

Prof Hayne also suggested Mrs Tumilty get in touch with Otago University Students' Association president Laura Harris, "an extremely smart and thoughtful young woman, who shares many of your concerns''.

Ms Harris said OUSA was taking the issue seriously and one of its "focal points'' this year was on sexual harassment education and prevention.

Last week, OUSA held a campus launch of Thursdays in Black - "a worldwide sexual assault campaign being relaunched this year with a tertiary focus''.

OUSA was also planning its own "comprehensive education programme about sexual harassment, the importance of consent, and personal safety, to pilot in university colleges ... in parallel with the university's proposed initiatives at the beginning of the year''.

Mrs Tumilty welcomed news that OUSA and the university had plans for education programmes in the works.

The university and police saying they were taking the issue seriously was nothing new.

They said that every year, she said.

"At a very minimum, [the university needs] to be producing people who understand their own entitlement, power, and privilege and understand how to be responsible, respectful people in society.''

Until that happened, she said, nothing would change.