Adventurer answers call of the wild 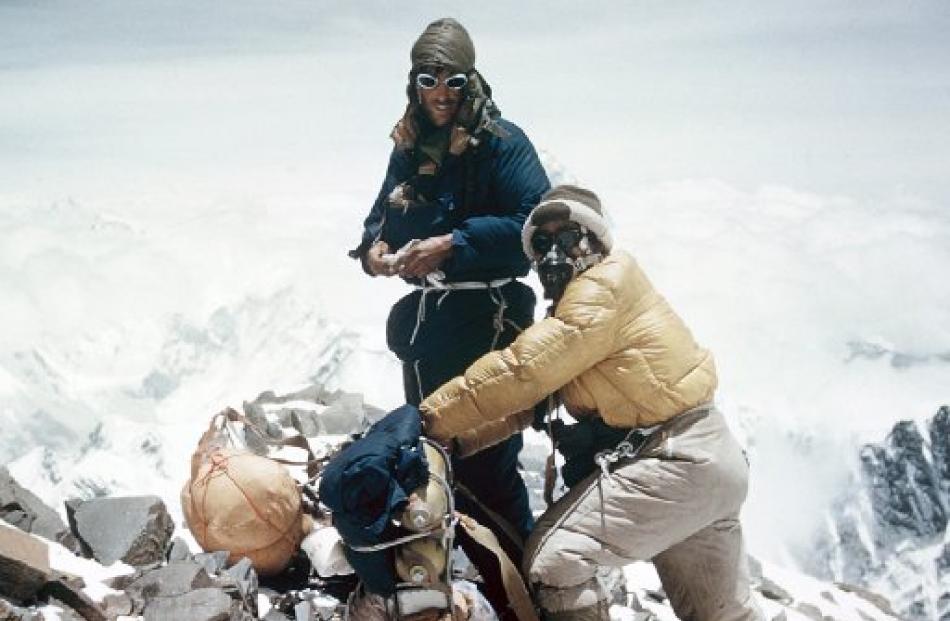 Edmund Hillary and an unnamed climber on Mt Everest during the successful 1953 expedition. 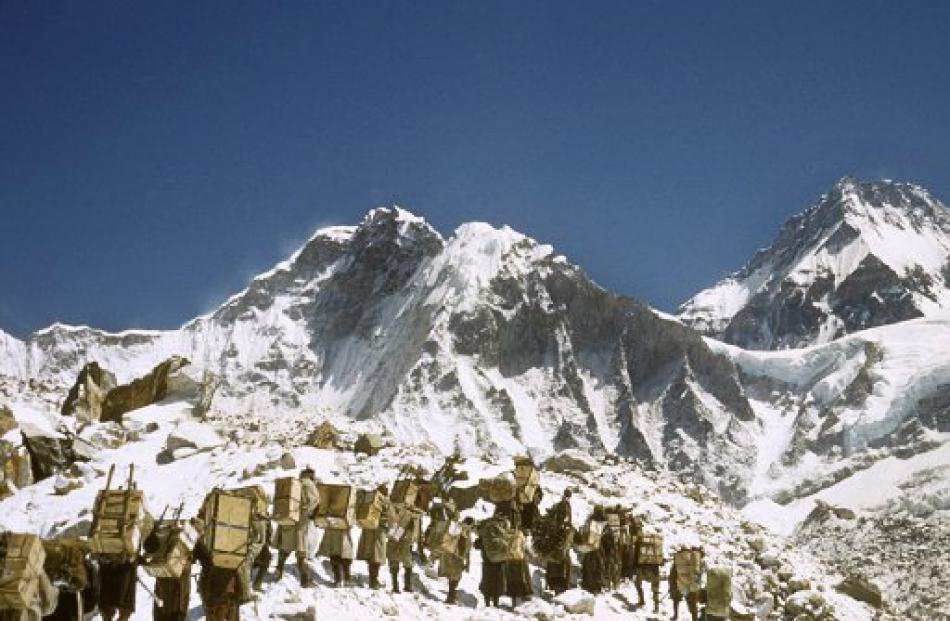 The expedition heads up Mt Everest from base camp. 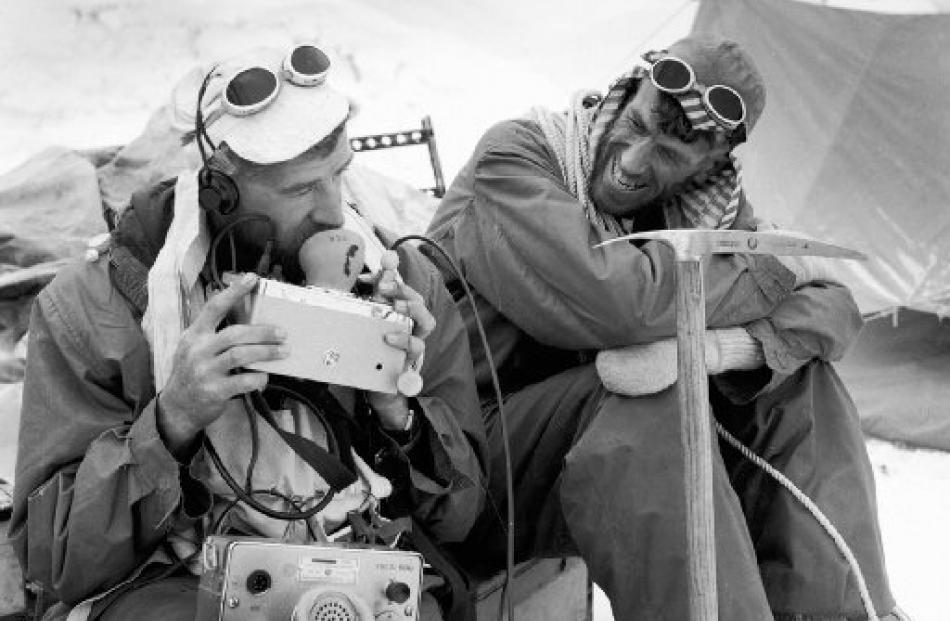 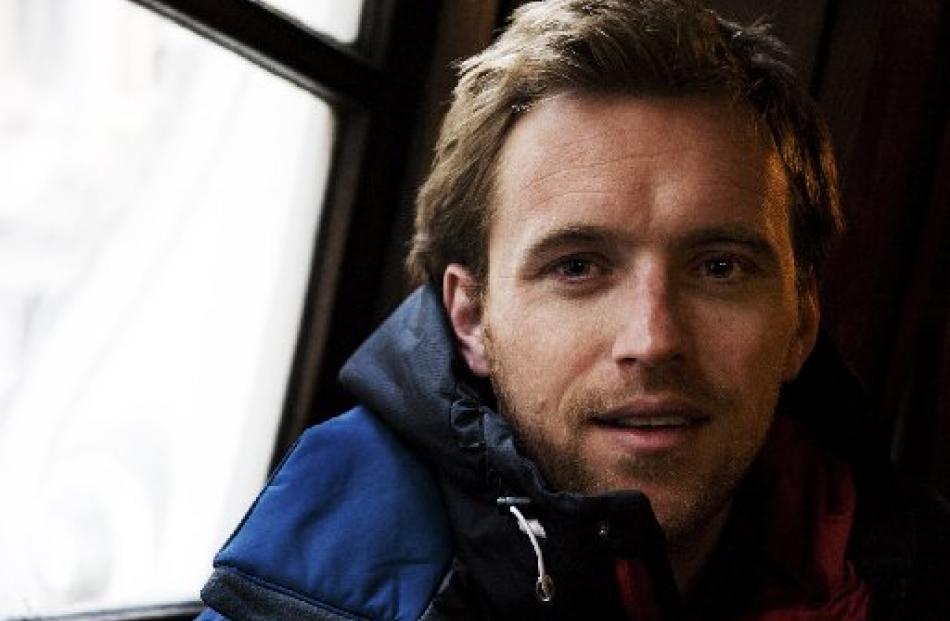 Some great stories will be told at the inaugural Dunedin Writers and Readers Festival next week, including those of Huw Lewis-Jones. Nigel Benson hooked up with the English climber, writer and historian.

Life is an adventure for intrepid author Huw Lewis-Jones.

Answering the call of the wild has become a raison d'être for the English explorer and historian, who travels the world lecturing on adventure and the visual arts.

Dr Lewis-Jones is in Dunedin for the inaugural Writers and Readers Festival, which runs from May 6 to May 11, presenting his illustrated talk ''In Search of Adventure - Expeditions and Explorations''.

The talk is based on his book The Conquest of Everest about photographer George Lowe, who accompanied Sir Edmund Hillary on the historic 1953 ascent of Everest.

It includes a slide show featuring rare original photographs, film, excerpts from Lowe's letters sent back to New Zealand and anecdotes from the expedition.

''I'll be doing presentations on Kiwi George Lowe and his original photographs from Everest in 1953, from one of my recent books,'' Dr Lewis-Jones told the Otago Daily Times from Cornwall this week.

Lowe was the last surviving member of the 1953 British Mount Everest Expedition, until he died last year, aged 89, at a nursing home in Derbyshire, England.

''I was lucky enough to know the late George Lowe, a veteran of the first ascent of Everest in 1953. A wonderful man who sadly died last year shortly after we'd completed a number of books together.

"It was a privilege for me to work with George; a huge honour, really. Far more important than awards. You don't often have the chance to meet your heroes.''

The Conquest of Everest, which marked the 60th anniversary of the ascent, reignited public interest in the ascent and exposed a new generation to Lowe's history-making photographs.

''We were all very upset by his passing, but it has been heart-warming to see how his story has now spread across the world.

"A true New Zealand hero, just like his best mate, Sir Ed. We do everything we can to honour him and his companions on that incredible expedition. They were true pioneers.''

At just 33, Dr Lewis-Jones has also scaled many peaks.

''I first travelled to the Himalayas as a student and have climbed in the Alps and North America.

"I now direct exhibitions with leading international documentary photographers, like renowned Icelandic photographer Ragnar Axelsson, as well as championing the work of emerging artists and other very talented creative people.''

He is a former curator of art at the Scott Polar Research Institute, University of Cambridge, and curator of imperial and maritime history at the National Maritime Museum, in Greenwich.

He is also a council member of The 1805 Club national charity, a Royal Geographical Society Fellow and a member of the Travellers Club in London. His other books include Ocean Portraits, Arctic, In Search of the South Pole and Mountain Heroes, which won 2012 adventure book of the year prize at the world ITB awards.

Dr Lewis-Jones' research interests include the intellectual history of exploration, maritime hagiography and the cultural history of the 19th century and he lectures on Antarctic and Arctic exploration, portraiture, print culture and the history of photography.

''For the last five years, I've been directing a number of international art and photography projects. I've also been lucky to curate a number of important private collections and, when I have the time, to do a little bit of telly and work as a polar guide and go into the wilderness on my own adventures,'' he said.

''I've been travelling with artists and photographers in polar regions for a while now, formerly curator of art at Cambridge University and the Scott Polar Research Institute, but mountains and the history of photography are other big passions for me.''

The couple run a publishing company, Polarworld, that produces books about the polar regions.

Titles to date include The Polar World by Sir Wally Herbert, North-East Greenland - The Trapper Era by Peter Schmidt Mikkelsen and Face to Face: Polar Portraits by Dr Huw Lewis-Jones, in association with the Scott Polar Research Institute.

Dr Lewis-Jones presents ''In Search of Adventure - Expeditions and Explorations'' from 12.30pm to 1.45pm, in the Dunedin Public Library Dunningham Suite, on May 11.

The talk will be chaired by Dunedin natural historian Neville Peat.

- The inaugural Dunedin Writers and Readers Festival is on from May 6 to 11.