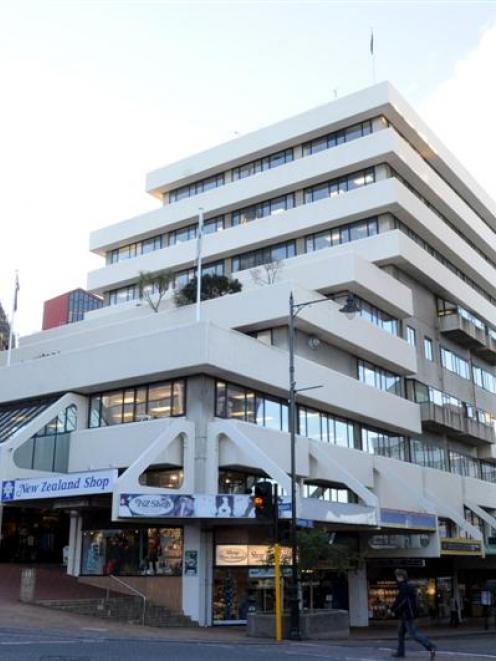 DCC building in the Octagon. Photo by ODT.
The Dunedin City Council has voted to not invest in the munitions, tobacco, fossil fuel extraction, gambling or pornography industries.

It will also divest itself of any investments in those industries within two years, where those investments are more than a certain level of materiality (to be specified).

Councillors yesterday voted to support proposals made by Cr Jinty MacTavish for a new ethical investment policy to be developed for the Waipori Fund.

About 300 submissions were received on the topic as part of the council's annual plan process, most in favour of the council formalising its informal policy not to invest in the munitions and tobacco industries and calling for it to avoid investing in a range of other areas, including many in favour of it not investing in companies involved in extracting fossil fuels.

Those submitters had a win yesterday, although a proposal to stop investment in the alcohol industry failed after Cr Chris Staynes pointed out alcohol was used in many areas, including medicine and as a possible future fuel source.

Several councillors said they had difficulties in relation to various excluded industries, because, for example, they drank or sold alcohol or drove cars.

the council's infrastructure services committee, said they in particular would feel like hypocrites, as they were in charge of managing highly fossil-fuel reliant city infrastructure.

Cr Wilson, of Middlemarch. noted she was probably the worst offender on the council for fossil fuel consumption.

Cr MacTavish said it was not their fault they were in charge of such a system and noted they were also in charge of the council's integrated transport strategy which guided the city away from such dependence.

Cr Lee Vandervis abstained from voting at all on Cr MacTavish's 14 suggested resolutions, which were taken one by one, because he said the piecemeal way of taking it made it invalid.

He also said he believed a large section of the community did not care what the council invested in, although Mayor Dave Cull pointed out they clearly did, given the number of submissions.

Others, including Crs Andrew Whiley and Hilary Calvert, voted against the exclusion of fossil fuel extraction industries or any of the suggested guiding principles for the fund manager.

The majority of councillors agreed to a phased approach to divestment over no more than two years.

They did not agree the fund manager should exclude reinvestment on the basis that it had an overall negative impact on social and community outcomes, as that would be too broad.

However, he should not invest in things that were illegal in New Zealand, inconsistent with the United Nation's policies on health and safety and child or human rights or expected to result in long-term, permanent or detrimental change to the environment.