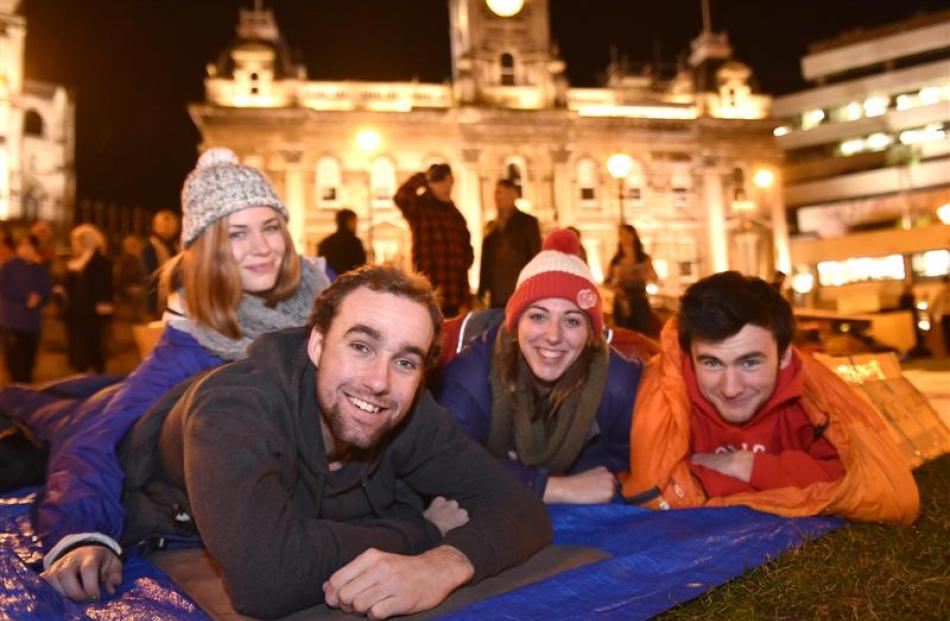 University of Otago students (from left) Sahara McDonald (20), Liam Kane (19), Mary Beban (21) and Victor de Salins (20) rug up in the Octagon last night during the Dunedin Sleep Out to raise funds for the city's night shelter.

The sleep-out, a joint project by the University of Otago Volunteer Centre, the Dunedin Night Shelter Trust and Otago University Students Association, was expected to draw nearly 200 university students between 8pm yesterday and 8am today.

The night shelter trust needs to raise another $220,000 by October to buy its two buildings in Lees St and secure its future.

It has already raised $380,000, with significant help from various trusts, including the Otago Community Trust, which contributed $200,000.

University of Otago Volunteer Centre co-ordinator Sze-En Lau said it was incredible to see so many people turn up to the sleep-out.

''But then I don't think we should be all that surprised, because the sense of community spirit in Dunedin is pretty high.

''It's really great to see students, staff and the wider community coming together.''

The event was not about experiencing homelessness, but about raising awareness and showing support for the shelter, which provided support to some of the city's most vulnerable citizens, she said.