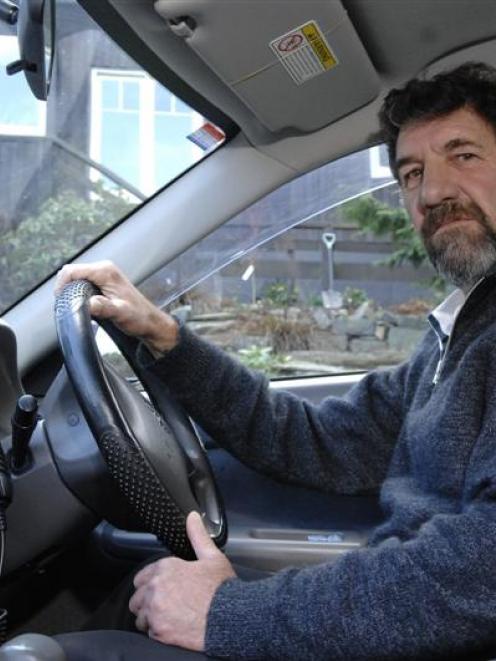 City Taxi driver Anthony Ware believes he will not see a cent of compensation owed by a drunk driver after he was seriously injured in a car accident last year. Photo by Linda Robertson.
A Dunedin taxi driver is calling for major changes to the justice system after a drunk driver four times over the legal limit was ordered to pay more than $30,000 in reparations for smashing into his van - money he has not seen a cent of yet.

Anthony "Starsky" Ware (57) and his seven passengers received serious injuries when an unregistered, unwarranted van, driven by a 19-year-old woman, collided with his City Taxi van on the intersection of King Edward St and Hillside Rd last November.

Mr Ware and his passengers had to be cut from the van and received injuries ranging from bruising, sprains and lacerations to concussion, a broken nose, broken ribs, lung contusions and a broken neck.

Mr Ware said his new van was written off, insurance only paid about half of its value and he lost four months of earnings while recovering from the accident.

The young woman was convicted on nine charges of drink-driving causing injury, disqualified from holding a driver's licence for two years and ordered to pay reparation of $30,203.23 for costs and loss of earnings to the victims.

She was paying $25 reparation a week to seven of the victims, but Mr Ware was angry because he was owed about $16,000 of the total and had not received any payments.

Otago District Collections manager Neville Griffiths said the payments she was making were paid to the victims on a pro-rata basis and the weekly amounts were so minimal that the courts waited until they built up to about $50 before giving payments to the victims.

This could take weeks, he said.

"It's stupid to send out a cheque for $12. But if someone felt the payment rate needed to be altered, it can be changed," he said.

Mr Ware said it was not fair on the victims and he felt sorry for his injured passengers.

"It's rough. Through no fault of our own, we've lost earnings.

"If I didn't have money in the bank, I would have lost my house. I've had to use a lot of my life savings to replace my vehicle. My boy is getting married in March next year - I could have used the money for that."

He was particularly upset about the number of offenders who were having their fines wiped by the courts in return for community service work.

Mr Ware suggested the Government put $70 million into a fund so the courts could pay the reparations directly to the victims and then recover the money from the offenders.

"Then the victims won't suffer. At the moment, the court system favours the offenders. There must be thousands of people across the country in the same predicament. That's just plain wrong."

Law commissioner Val Sim said the Government had asked the Law Commission to look at the issue of compensation and state-funded reparation in response to concerns raised by victims like Mr Ware.

She said Mr Ware's suggestion of government funding to pay reparations was one of various options due to be presented for public consultation by the end of September, and the commission would make a recommendation to the Government on the best option.