Another crash as South stays icy into afternoon

Frost is persisting in shady spots and some Southern motorists are having trouble on the roads.

A van rolled into a ditch in frosty South Otago conditions about 12.30pm today, while a driver lost control of their car in Central Dunedin earlier.

A Balclutha Fire and Emergency officer at the scene said a single male occupant was driving the vehicle on the rural Hillend Rd about 17km north of Balclutha when the incident occurred.

She said the van appeared to have lost control on a bend after hitting ice, before rolling and coming to rest in a ditch.

The occupant was able to walk from the scene with assistance, and was treated for minor cuts and bruises by emergency officials in attendance. 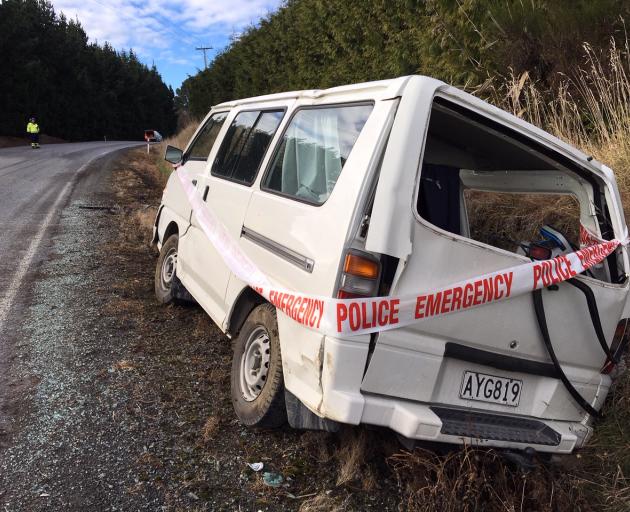 A van rolled into a ditch in frosty South Otago conditions about 12.30pm today. Photo: Richard Davison
She said the incident could have been more serious, and urged drivers to take extra caution during frosty conditions this winter.

This morning the South is being hit by freezing temperatures again, with Dunedin Airport at -6degC at just after 7am and another heavy frost forming in part of Dunedin City.

Frosty conditions were persisting in shady spots in Dunedin and some inland locations were still below zero at 11am, with Dunedin Airport at -2degC.

A car left the road at the intersection between Heriot Row and London St after 9am with road conditions still icy.

Queenstown Lakes District Council warned it was "another chilly one" with strong frosts in places and temperatures down to as low as -9degC in the wider Otago region.

"Take extra care in shaded areas which are the most likely to ice up, so driving through trees and on the shady side of hills/mountains should be treated with extra caution." 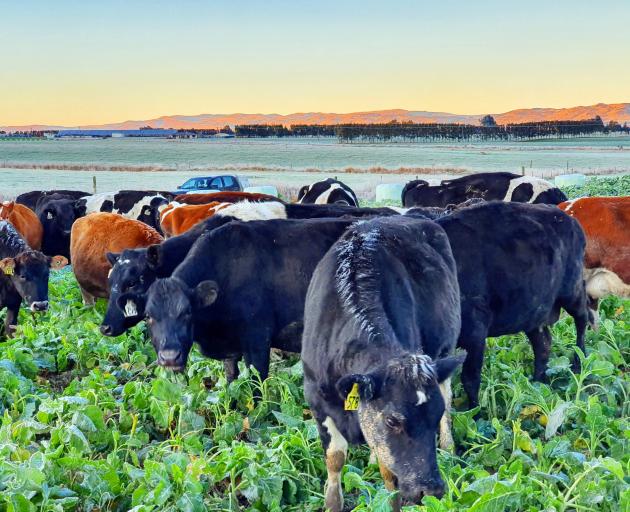 Yesterday morning southerners had to scrape the ice off their cars — and cows — after the coldest morning of the year for some yesterday and it's another freezing start today.

The coldest spot yesterday in Otago and Southland was Wedderburn, which recorded -7.8degC, followed closely by Dunedin Airport at -6.5degC and Shotover Country at -4.9degC.

A lack of weather fronts moving through the South, combined with clear skies and the longest night of the year , meant temperatures plummeted.

"It was a bit of a recipe for cold temperatures."

Dunedin recorded its coldest night of the year so far, below the previous coldest on June 14.

"Central Otago has been on a run of cold temperatures over the past week so it’s not new for them.

"In the Deep South it was especially cold — -3degC was average for most of Southland."

He said cold and frosty weather was set to continue, particularly if the sky remained largely cloud-free.

"No real weather systems mean it is set to remain cold, frosty and largely dry.

"This week looks very chilly — there will definitely be more frosts."

Grit trucks were out in force — 82 tonnes of grit was used yesterday, costing about $8700, alongside 6000 litres of calcium magnesium acetate (CMA) costing $3700. 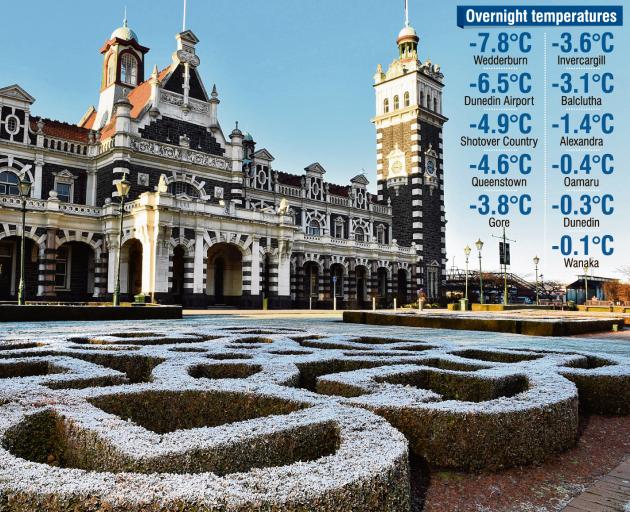 Jack Frost left his distinctive mark around many parts of Otago yesterday, including on the Dunedin Railway Station garden. Photo: GREGOR RICHARDSON/

So far this year it had gritted roads on 14 days and applied CMA on seven days.

A police spokeswoman said there were no frost-related crashes on roads yesterday morning.

-4C to -8C! In Alberta, before we moved to Vancouver Island we had between -40C and -50C most winters; you can't even imagine that in NZ.