Healthcare assistant Teinaki Taana stands in front of the graffiti at Te Kaika’s vaccination centre in Victoria Rd, Dunedin, yesterday. PHOTO: PETER MCINTOSH
It will be business as usual at the Te Kaika vaccination and testing centre in Dunedin today, despite an expensive and demoralising graffiti attack at the weekend.

The St Kilda centre, which has dispensed thousands of Covid-19 vaccinations, many of them to vulnerable populations, was tagged extensively with antivaccine slogans sometime on Sunday night or Monday morning.

Te Kaika chief executive Albie Laurence said the graffiti would cost the community health trust $50,000 to clean up and insurance would not cover the damage. 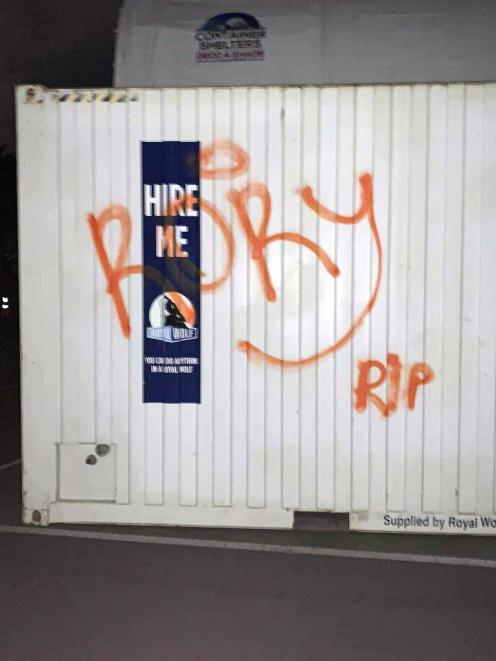 "We are a non-profit here to help an underserved community. The vandalism takes money away from that community."

Dunedin police said the vandalism was reported at 8.30am yesterday and inquiries were ongoing.

This is not the first time the testing centre has been targeted, and similar graffiti late last year cost $10,000 to repair.

Mr Laurence said people had a right to protest, but Te Kaika was not forcing anyone to get vaccinated and destroying property was out of line.

The containers had just been painted with child-friendly images and would cost at least $16,000 to clean, money which could have paid for 8000 medical visits to Te Kaika.

Protesters wrote "Die", "Why Kids?", "Stop It" and "Rory RIP", a reference to Rory Nairn, a Dunedin man who died of myocarditis in November 2021 soon after receiving a Covid-19 vaccine.

Mr Laurence said the attack was particularly wrong-headed because Mr Nairn had not received his vaccine at a Te Kaika facility.

"We are going to reach out to Rory’s family and friends for a hui. We want them to know what we are trying to do," Mr Laurence said.

Testing centre staff told anyone who came to them about the possible side-effects of vaccination.

Graffiti at the vaccination and testing centre. Photo: Peter McIntosh

The Te Kaika centre had no security cameras, but Mr Laurence said it was looking into installing some.

Despite the graffiti, Te Kaika would open this morning for testing and vaccinations.

"It’s demoralising for our staff, but we have important work to do," Mr Laurence said.