Around the world cycling record recognised 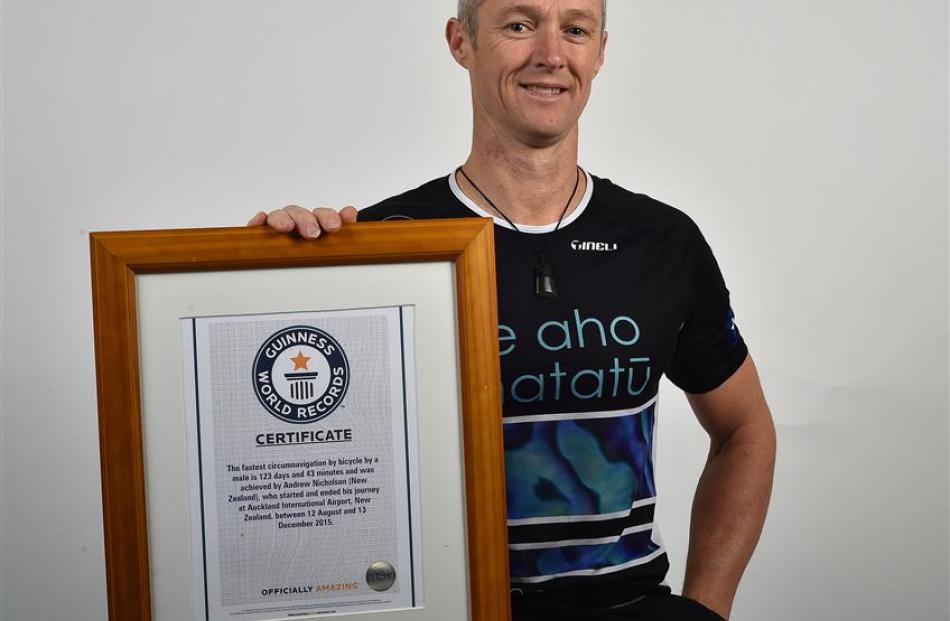 Dunedin cyclist Andrew Nicholson (45) holds his Guinness World Records certificate for being the fastest to cycle around the world. Photo by Gregor Richardson. 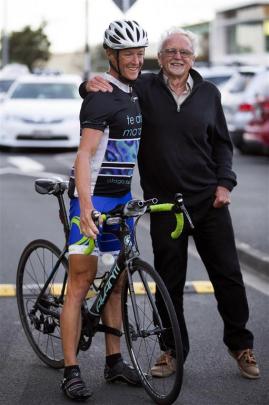 Andrew Nicholson is congratulated by his father, Peter, last December after arriving at Auckland International Airport, to finish his record-breaking 28,970km round-the-world trip. Photo by The NZ Herald.

A certificate recognising Andrew Nicholson's efforts to become the fastest man in history to circle the globe on a bicycle has given an unexpected boost to the Dunedin cyclist.

Mr Nicholson finished his massive ride in Auckland in December, when he completed the 29,179km route in 123 days, one hour and six minutes, about two days faster than the previous world record.

That meant he had to cycle close to 240km a day, alone, with no back-up, a journey that took him through 25 countries and resulted in 47 punctures in the eight tyres he used.

He lost 7 kilos of body weight during his ride.

Now he has proof of the record, a certificate sitting snugly behind glass in a frame.

He said yesterday getting it was a good feeling.

"It means a lot more to me than I thought it would, actually.

"It's genuine recognition, even if it's just for me and those close to me.

Mr Nicholson said the the application process was a gruelling task in itself, on top of the round-the-world ride.

It was not a situation where there were officials on hand, or electronic timers. Instead, there were rules to make the process fair, and eliminate cheating as much as possible.

He sent Guinness his GPS co-ordinates for the trip, taken from a tracker that showed where he was on his journey every 10 minutes.

But he also had to accumulate receipts, photos at landmarks, and witness accounts as he went, on top of his 240km-a-day effort.

That required "a photo of you going across the Mississippi River, for example, and so I'd stop and take photos, which is a pain in the arse to do when you're riding a bike''.

"You've got to race.

"I had a huge bag of receipts but I got caught in a tropical rainstorm and some of my receipts got ruined.''

"They [Guinness] want to try to bring some credibility to the record, and they are doing that.''

On his memory of the trip, Mr Nicholson said the main thing was "I pulled it off''.

"It had all the dramas, it really did.

"It's taken me this long to realise what a phenomenal achievement it was.''

There were moments when the ride was "massively cool and interesting''.

That included cycling down smooth, safe roads in the Rocky Mountains in Canada, amid stunning scenery.

There was also "massive stress and massive traffic'' at times, in countries like India.

He said Hyderabad, in southern India, was an interesting experience, with heat and smell and traffic taking "enormous concentration and focus''.

He also became very aware of the size and scale of planet Earth.

"Obviously, by bicycle, you realise how massive the Earth is.''

But riding across Australia, or the Saskatchewan plain in Canada "the distances are just so vast''.

He also noticed how clean New Zealand rivers were when he returned, compared to their overseas counterparts.

"You can smell the cleanliness of New Zealand.''

Of the physical toll of the trip, he said it was not until he got towards the end of the ride in Australia, after more than 100 days, he became "truly fatigued and slow''.