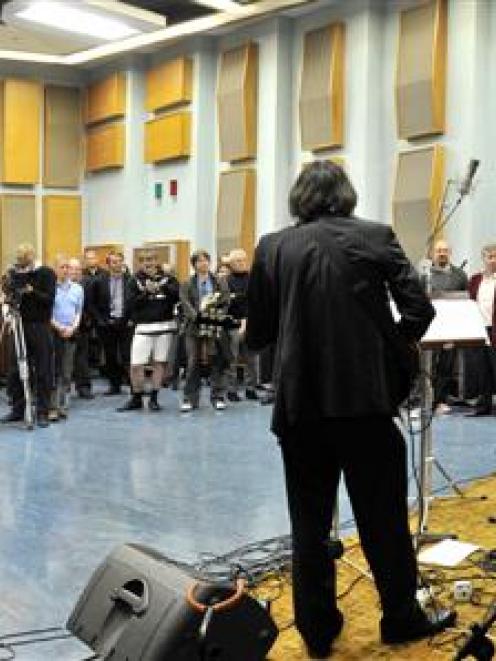 The Verlaines perform at the launch of the New Zealand Music Industry Centre in the Albany St building in May 2010. Photo by Gerard O'Brien.
Some classes have been moved from the University of Otago's multimillion-dollar Albany St recording studio after ‘‘faster than expected deterioration'' of parts of the asbestos-riddled building.

The former Radio New Zealand recording studio - with a capital value of $1.41 million - is used by students and Dunedin musicians and has a large collection of recording equipment, including a mixing desk believed to be worth close to $1 million.

The future of the building remains unclear, but the university confirmed some Department of Music classes had been shifted to the College of Education because of the deteriorating condition of office space - which had been used for teaching - in the building.

Second-year music student Bryn Massey (19) said music students were told about the discovery at the end of last year and music performance students had been based in the University of Otago College of Education building since the start of the academic year.

She said she attended regular classes in the building last year and, while students had not been told a ‘‘whole heap'' about the situation, she was not worried.

‘‘But I would prefer that they were fixing the building, because it is a great building and the recording studio is one of the best in the southern hemisphere.''

University director of property services Barry MacKay said the university was aware of the asbestos when the building was bought in 2007. But because of ‘‘faster than expected deterioration'' of the building, some areas had been closed.

‘‘The music recording studios remain in use and operational,'' he said.

‘‘Since the start of the year, some teaching - namely vocals and guitar lessons - has been transferred from space at the Albany St building to an available studio facility at the College of Education.

‘‘Teaching of drums, band performance recordings and practices are still run at the Albany St facility.''

No asbestos-containing material had been released, but the university had ‘‘taken steps to mitigate'' the decline of the building.

‘‘This has involved a management plan that has resulted in a projected finished cost of around $150,000 in mitigation work,'' he said.

‘‘This includes a programme of physical work to repair seals and flashings ... to reduce the risks of leaks and failures, as the asbestos-containing material in the building is mostly within the ceiling and roof cavity.

‘‘The interior work is complete and the roof work is under way.''

Weekly air testing was being done within the building, he said.

‘‘None of these tests have returned any trace of asbestos,'' Mr MacKay said.

‘‘The asbestos material only becomes a safety issue to people once airborne. Roof areas and plant areas where asbestos material is more accessible are currently locked down and only able to be accessed by staff and contractors taking appropriate preventive measures.''

The future of the building would be reassessed in the next two years.

The university bought the complex from Radio New Zealand in 2007.