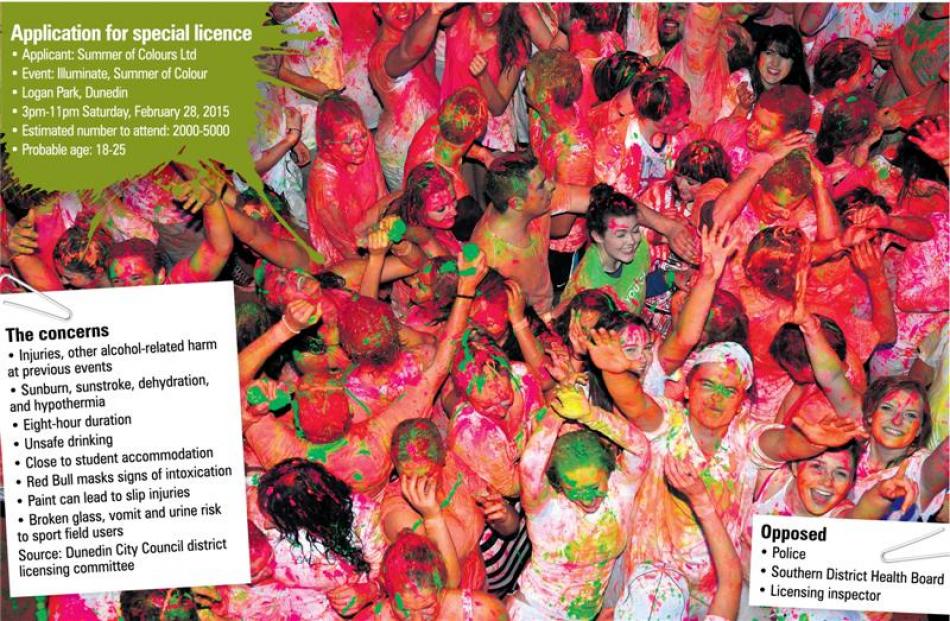 A plan to hold a paint party near a ''notorious'' student flatting area has been opposed by authorities.

The company behind ''Illuminate: Summer of Colours'' anticipates 2000 to 5000 partygoers will attend the eight-hour R18 event at Logan Park on Saturday, February 28.

However, the special licence application by Summer of Colours Ltd was opposed by police, the medical officer of health and the Dunedin City Council's licensing inspector, who noted ''hosting this event among the vulnerable student community will have significant risks''.

While there were no objections on the suitability of the applicant, issues were raised with the location and nature of the event.

An area within a 1km radius of the event location attracted 120 alcohol-related callouts for police between February 1 and April 1 and, as a result, 17 people were taken into police custody for detoxification.

In his submission, Dr Keith Reid, of the Southern District Health Board, said previous paint parties had been problematic with ''injuries and the alcohol-related harm associated with these events''.

In 2013, the Illuminate paint party attracted 5000 people to Forsyth Barr Stadium and the hospital's emergency department experienced one of its busiest days.

Those parties had placed a ''huge burden'' on health services, police and licensing staff, but the latest application was of particular concern, Dr Reid said.

The outdoor event meant partygoers were at risk of sunstroke, sunburn, dehydration during the day and possible hypothermia if it was a cold evening.

The event would ''attract young people to the surrounding area to preload and they may be denied entry due to intoxication or being a minor'', he said.

Dr Reid was also concerned with the event's eight-hour duration, pass-outs (which would encourage off-site drinking), sales of Red Bull (which can mask intoxication), and the risk of injury from paint slides, pools, wrestling and Zorbs.

The District Licensing Committee hearing will be held next Wednesday.