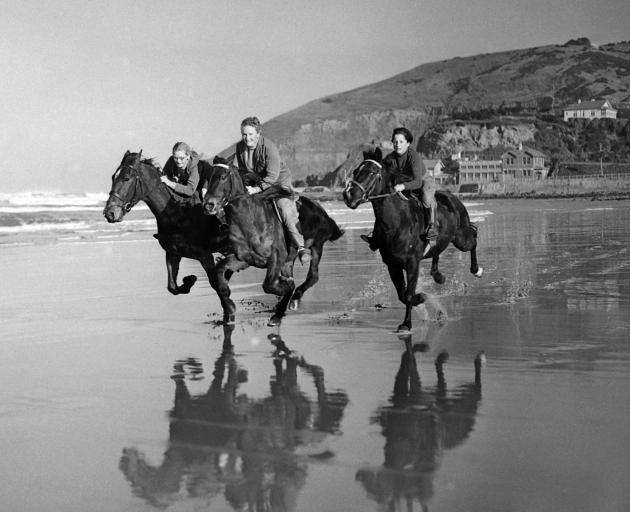 Galloping along the sand in a now-well-known 1958 shot are (from left) Alison Lindsay (nee Dean, 14 at the time), Carole Evans (nee Dean, 16 at the time), and Alison Jones (nee Fortune, 13 at the time) on horses Peter’s Pal, Flicka, and Dandy. PHOTO: ODT FILES
When the photographer called them over, they thought they were in big trouble.

After all, riding horses along St  Clair Beach was banned in 1958. 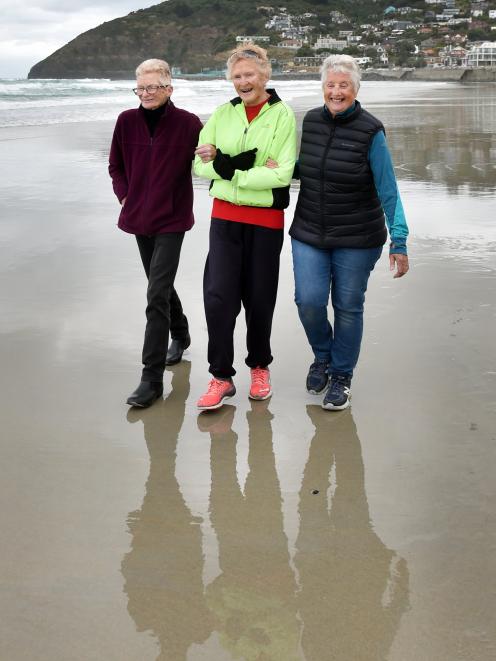 Alison Lindsay (nee Dean, left), Carole Evans (nee Dean, centre), and Alison Jones (nee Fortune) walk along the beach where they famously galloped their horses at St Clair in 1958. PHOTO: PETER MCINTOSH
But in actual fact, the Evening Star photographer thought the three teenage girls galloping their horses on the sand would make a nice photo.

More than six decades on, the photo has become well known in Otago — much to the surprise of its stars.

Alison Lindsay (77, nee Dean), Carole Evans (79, nee Dean) and Alison Jones (75, nee Fortune) got together at the site of their famous photo last night, the first time the three have  been together in years.

But, they have  kept in touch, and Mrs Jones said horses had played a huge part in all of their lives.

Ms Lindsay is the only one to still have a horse; the other two  have traded in four legs for two wheels  by getting bikes.

She said while it was illegal to ride along the beach at the time, the trio used to do it quite often.

Not content with sticking to the beach, they would also ride to shows, competitions and gymkhanas around the regions.

Mrs Evans said the beach was great to ride on as the sand was hard.

The success of the photo took them all by surprise.

‘‘I was amazed. It’s become quite iconic,’’ Mrs Jones said.