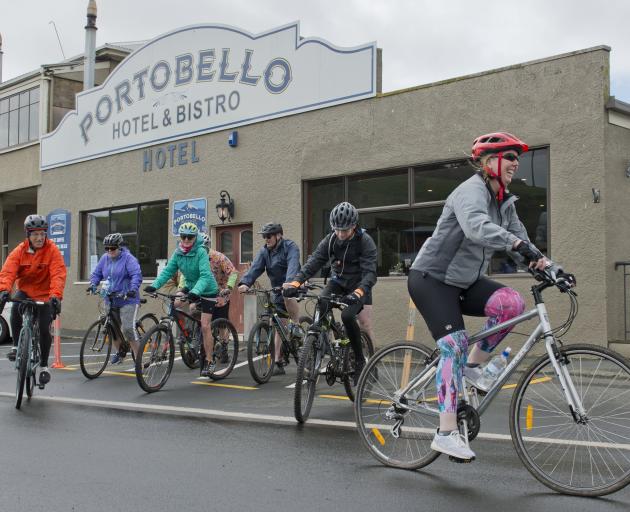 Trish Rigby leads a group of cyclists on a sponsored ride for MS Otago from Portobello to the Otago Yacht Club and return yesterday. PHOTO: GERARD O’BRIEN
Strong wind and driving rain could not prevent eight hardy Dunedin cyclists from completing a 40km ride yesterday to raise funds for MS research.

Trish Rigby, whose multiple sclerosis was diagnosed last year, also initiated a harbour ride last year to raise awareness of MS Otago and fundraise for the organisation and MS research.

Ms Rigby said about 20 people participated in last year’s ride, held on a warm, calm day, and about $2500 had been raised.

"I just wanted to help out because MS Otago was really helpful when I was first diagnosed. They connected me with the right people," she said.

The latest ride, Ride for MS 2020, followed a different harbour course, from Portobello to the Otago Yacht Club in Magnet St and back.

The latest event had raised awareness and more than $1000 for MS Otago, despite some potential participants being deterred by the bad weather.

"The weather was no fun today, and the rain was awful," she said.

People wishing to make further donations could do so online via msotago.org.nz/ride and it was hoped to make the event an annual fixture.

A statement on the organisation’s internet site warned that the riders would be participating in the harbour run.

"Keep an eye out for us riding from Portobello to the Otago Yacht Club and back — we will be the ones dressed in our loudest and brightest, making sure we are noticed," the statement said.

MS Otago field officer Valerie Wilson said the money raised last year would go towards international research, but this year all funds raised would stay in Otago and be used for research.