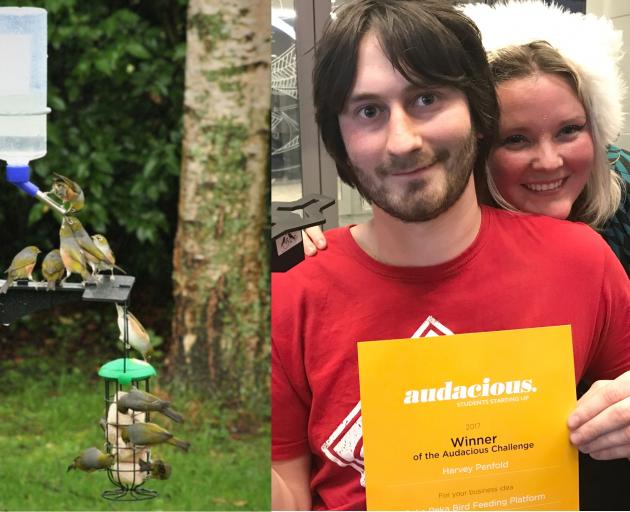 Second-year Otago Polytechnic design student Harvey Penfold said he was "excited" to have scooped the prize, which included investment into his business from the Otago Community Trust.

The platform differed from others because it not only included a sugar water bottle, but also had hooks so different feeders appealing to different birds could be hung from it separately at the same time, he said.

Orokonui Ecosanctuary educator Tahu McKenzie said the platform had already been used as part of the Valley Project Open Vue study of birds in the Northeast Valley area.

Ms Mackenzie said the platform base had been integral to gathering crucial data on the types of birds that inhabit Northeast Valley.Mitre 10 sponsored gear for the citizen science project, which involved 75 feeders made for households in the area, Miss Mackenzie said.

"When Mitre 10 saw the photos of so many birds using it, and how easy it was for people to attract birds with, they said: ‘Can we sell it?’."

They had provided 50 units for the store to sell and had "lots of pre-orders" from people wanting one for their backyard, she said.

The polypropylene feeder filled an important gap in the market because it could feed many different birds at once, and more native birds fed meant they were  better able to breed.

Mr Penfold would fit further development of the business around his final year of design studies next year.

He hoped to use investment funds to injection-mould the feeder platform with the help of a Mosgiel company.

The pair will hold bird-feeding workshops at Mitre 10 Mega at 11am and 1pm on October 3, 4 and 5 to tell people how to better attract native birds to their backyards.

They hope to have PekaPeka feeders ready to sell at the workshops.