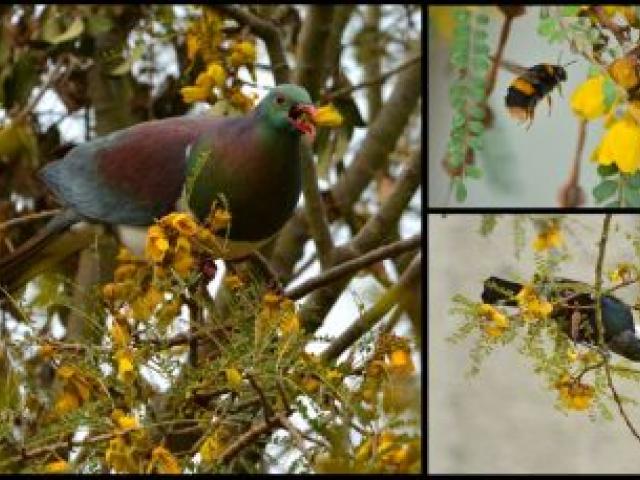 A kereru, a bumblebee and a tui find a blossoming kowhai an irresistible attraction at the Dunedin Botanic Garden yesterday. Photos by Gerard O'Brien.
A record-breaking run of warm July weather has Otago's birds chirping and plants bursting into flower.

Mean July temperatures throughout Otago have been between 1.9degC and 4degC higher than normal. Dunedin's Musselburgh site has broken a 66-year record with an average 8.4degC, 1.9degC warmer than normal, Niwa figures show.

Oamaru, Alexandra, Wanaka and Nugget Point had also recorded their warmest July temperatures and Lauder was nearly 4degC above its normal mean temperature, at 5.8degC.

Wanaka also recorded its highest July morning temperature since 1972, with 9.2degC on July 22.

Dunedin Botanic Garden manager Alan Matchett said some plants had flowered two or three weeks early and others were flowering on time.

Some kowhais were winter-flowering as were red-flowering rhododendron.

Bulbs such as the garden's crocuses were coming out, too.

The downside to the early flowering was the risk of late frosts destroying the flowers, he said.

MetService meteorologist Dan Corbett said the region was experiencing warmer-than-normal temperatures for the time of year and they were expected to continue until the weekend.

''You've had a nice winter-time high. It's been very pleasant indeed.''

On Sunday, Dunedin recorded 16degC, compared with the about 10.5degC expected for this time of year, he said.

The next few days would be characterised by high cloud and fine weather, but a few fronts could pass through the far south, bringing a slight change to the weather by Thursday and Friday.

''It might be wetter and cooler, but you'll still be in double figures by day.''

Weekend weather was expected to be unsettled with night-time lows cooler than the past week.

However, people should not be lulled into a false sense that winter was over. There were still August and September to watch out for, Mr Corbett said.