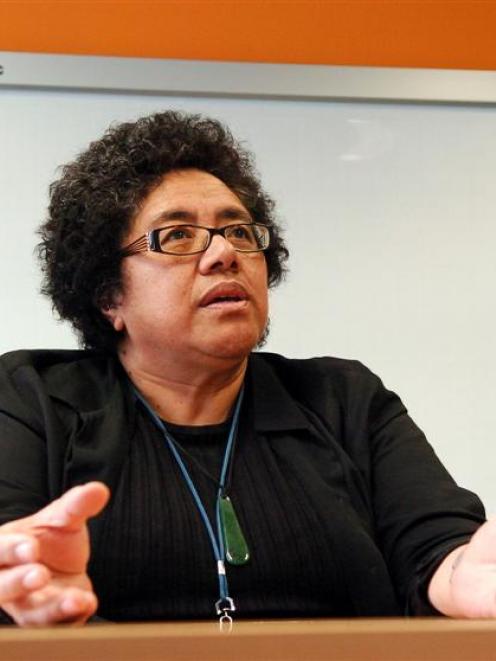 Mere Montgomery speaks about her involvement with the Polynesian Panthers. Photo by Gerard O'Brien.
For Dunedin woman Mere Montgomery, today is the chance to meet one of the men behind a movement which has helped shape her life.

Emory Douglas, the official artist of the United States' Black Panther Party and its first and only Minister of Culture, is in Dunedin today to speak at the Dunedin Public Art Gallery about the art of revolution.

Mr Douglas is the Elam International Artist in Residence at The University of Auckland.

In the 1970s Mrs Montgomery became involved with the New Zealand Polynesian Panthers, a group which sought to emulate the work done in the social justice area by its American counterpart.

When the group started in Auckland, Mrs Montgomery, who now works for a Government social work agency, was still in high school, but was acutely aware of the social injustice which faced many Pacific Island immigrants to New Zealand.

The group set up homework centres to help disadvantaged youth from, what were at the time, the poor suburbs of Grey Lynn and Ponsonby.

It accessed legal aid, before legal aid was officially set up, took elderly women to visit family and visited prisoners at Mt Eden and Paremoremo.

In 1973 Mrs Montgomery moved to Dunedin to study law and started the Dunedin Polynesian Panthers, becoming distracted from her degree with the pull towards social justice.

The group had about 10 dedicated members who would visit prisoners, organise legal aid and who set up an education centre in Burns Hall.

Mrs Montgomery said Maori and Pacific Islanders in Dunedin soon came to recognise her "afro" hair and that she was the woman to go to for help.

She said the group was aware it was watched by the SIS and scrutinised by police, who would make friends with her pakeha flatmates so they could get close to her.

People accused her of inciting "racial disharmony" but she became known as an advocate for people throughout the city.

The group "petered out" when Mrs Montgomery was married.

Emory Douglas and Fiona Jack of the Elam School of Art, University of Auckland, will speak at 3pm today.