BLM protests across NZ, Little says 'we've got to change'

Thousands of people have gathered for Black Lives Matter rallies in centres around the country this afternoon.

Hundreds of people have gathered at the Otago Museum reserve to show solidarity with anti-racism and anti-colonialist movements.

The protesters marched down George St to the Octagon, where they held a rally.

In Wellington, Justice Minister Andrew Little has admitted that there is "something wrong" with New Zealand's justice system, as thousands across New Zealand took to the streets in solidarity with the Black Lives Matter movement.

Speaking to thousands who marched to Parliament this afternoon, Little admitted that "we've got to change," when speaking about New Zealand's justice system.

He said that as Minister of Justice, it was "pretty clear to me pretty much the day I got in that office what was happening in our criminal justice system".

Crowd starting to pile up in Wellington #BlackLivesMatter pic.twitter.com/I4v2PxBhwG

But he said change needs to come from all of Government – he name-checked health, education Whānau Ora, the Ministry of Social Development.

"All of them are involved in what happens [with] justice in New Zealand."

Little, and other organisers, spoke to the gathering of between 3000 and 5000 people outside Parliament.

The Auckland rally opened with a karakia at Aotea Square and a mihi whakatau from Graham Tipene of Ngāti Whātua, who told the crowd to "keep it peaceful".

"Our kids are here, so let's do it right and fight for what's right."

Members of the Ethiopian and Somalian communities addressed the crowd on the Black Lives matter movement, along with social justice campaigner Julia Whaipooti, who talked about the use of armed police in predominantly Māori and Pasifika areas. 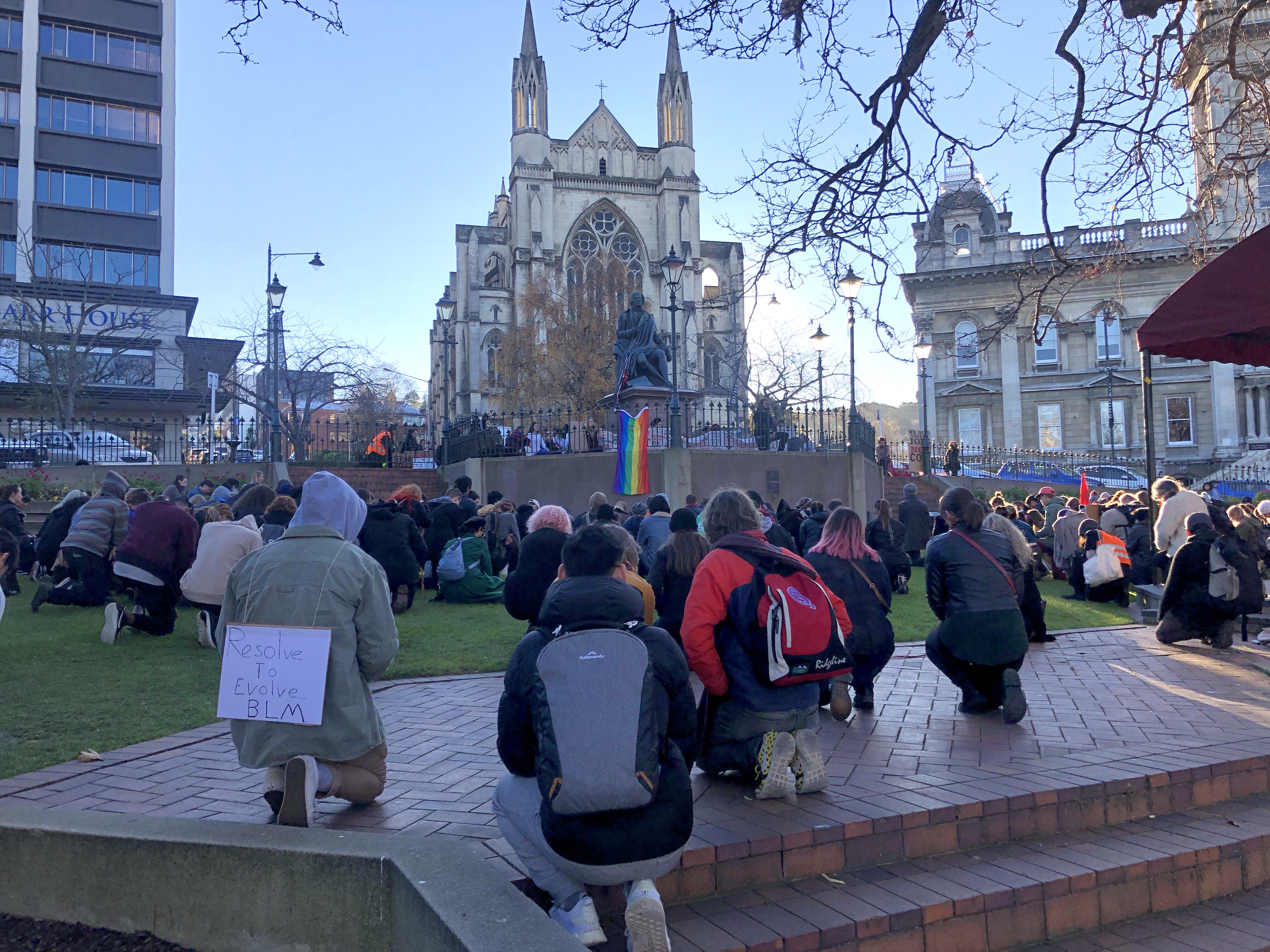 Around 300 people take a knee during an anti-racism march in Dunedin's Octagon this afternoon. PHOTO: TIM MILLER

"For many of us this is not a new moment in time, not a hashtag on Instagram."

Emilie Rakete from People Against Prisons Aotearoa and the Arms Down movement also spoke about armed police and said the "truth is that we live on a graveyard in Aotearoa", with NZ police laying down the bodies.

"When the cops say hands up, we say arms down."

Organisers have asked those attending to remain peaceful and refrain from offensive language.

They say the march is intended to show solidarity for the Black Lives Matter movement, and to "stand against racism locally, nationally and globally".

Do the university numbers not reach about 14,000 in term time? If not now they do reach into many thousands. Where were all the other students? Dunedin and environs has a huge population of 125-130 thousand people. Where were they? In other words the report is not representative of a democratic country but one where the media love this stuff. But it is weak, leftist, kowtowing journalism.

I watched The Hui hosted by Mihingarangi Forbes this week. An excellent interview with our new police chief who spoke of many factors facing policing. I think we can take heart in his leadership. He spoke in a manner which indicated his understanding of race issues facing NZ police. He stated at the time a situation developes and call is made to the police. They dont know what will be there on arrival. They dont create the sitn. He shows a lot of willingness to address how they act when they are called, and they are called.

The Hui interview with the new Police chief
https://www.youtube.com/watch?v=ey9G233f_CE