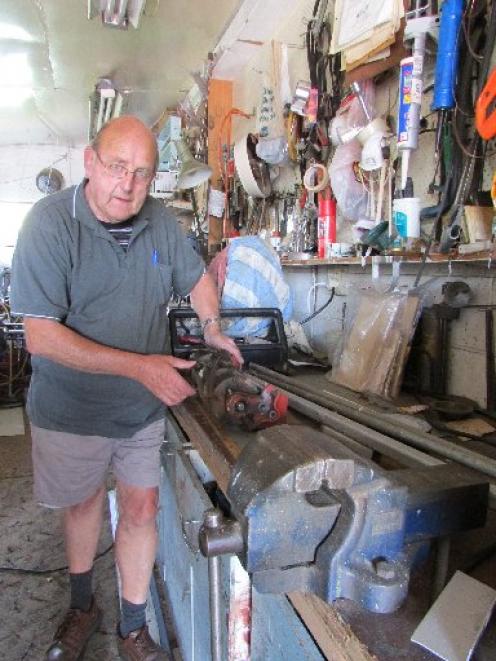 Bloke's Shed advocate Bob Biggart, who is organising a public meeting about possibly establishing a North East Valley shed, works on some projects in his shed at home. Photo by Brenda Harwood.
The Bloke's Shed concept has been a great success since the first shed was established at Taieri Aerodrome in 2007.

Since then, a second shed has been founded at King's High School, with both sheds providing space and equipment for home handymen and women to take on community and personal projects, while enjoying a chance to socialise.

Now it is the turn of North Dunedin to embrace the concept, with a public meeting to discuss the idea of setting up a Bloke's Shed in North East Valley to be held later this month.

Bloke's Shed initiator Bob Biggart, who has been involved in setting up both of Dunedin's existing sheds, is joining forces with Age Concern Otago and the North East Valley Project to gauge support for a shed in the valley.

Local businessman and Dunedin City Councillor Doug Hall has already come to the party, offering space and the shell of a shed in Bonnington St, off Norwood St, as a potential home for a shed group.

''The idea of the public meeting is to gauge the interest among the community for having a Bloke's Shed in the north end,'' Mr Biggart said.

North Dunedin was a logical place to have a shed, given that it encompassed a large area and had a strong community spirit, he said.

The Taieri Bloke's Shed had been so successful that it now had close to 100 members, and had needed to move to larger premises within the aerodrome, he said.

''The group out there is very active. They are taking on community projects - such as making letter boxes and building planter boxes for Mosgiel's main street - and helping out anyone that they can.''

Each Bloke's Shed is directed by the skills and wishes of its own members, with women and younger people very welcome to take part, use the equipment and share expertise.

The public meeting to discuss establishing a Bloke's Shed in North East Valley will be held on February 27, at 5pm in the Community Rooms at 262 North Rd.

If there is sufficient support, a working bee may be held on the following Sunday at the shed site in Bonnington St.