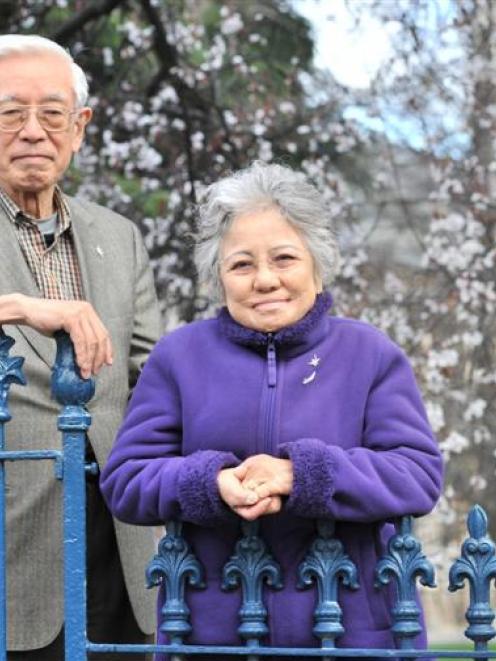 Hiroshima atomic bomb survivors Michimasa Hirata (77) and Shigeko Niimoto Sasamori (80) are calling for an end to nuclear weapons. Photo by Jane Dawber.
Two survivors of the atomic bombing of Hiroshima shared their horrific experiences with a Dunedin audience yesterday in the hope it would spread a message of peace and ensure it never happens again.

Shigeko Niimoto Sasamori was aged 13 and Michimasa Hirata 9 years old when the United States dropped the atomic bomb from 31,000ft on Hiroshima on August 6, 1945.

On that morning, Ms Sasamori, along with other high-school pupils, was preparing to help clear escape routes in case of a fire bombing when she looked into a clear blue sky and saw an American plane.

She pointed it out to her classmate.

"I called her to look up at the plane.

"At the same time I pointed up to the sky ... I saw the plane drop a white thing.

"At almost the same time there was very, very strong forces; I can't explain how strong it was," she told about 150 people at a public lecture at the University of Otago yesterday.

She was knocked out by the blast and left with third-degree burns to 25% of her body.

When she awoke, she followed a group of adults who were slowly walking away from ground zero, encountering many people dead or with horrific burns along the way.

"Everyone was hurt," she said.

She made it to a school auditorium, where she spent five days before being taken home by her mother.

In 1955, she went to the United States, where she received extensive plastic surgery to repair the damage caused by the atomic bomb.

"She now lives in California.

Ms Sasamori pleaded with the Dunedin audience to help make sure there were "no more Hiroshima, no more Nagasaki; no more Hibakusha (the Japanese word for atomic-bomb survivors)".

Mr Hirata, who was with his family when the bomb fell, said more than 17,000 nuclear warheads were still in existence.

"You can imagine 17,000 nuclear weapons can easily extinguish the Earth," he said.

Speaking to the Otago Daily Times, he said he became involved in the antinuclear movement when he was 55 after seeing a work colleague - who he had not known was also a survivor - taking part in a march for nuclear abolition.

Before that, like many Hibakusha, he had kept quiet about his experience for fear of encountering discrimination because of the effects radiation had on survivors.

Ms Sasamori and Mr Hirata will be guest speakers at a commemorative peace vigil at the International Peace Pole at the Otago Museum Reserve at noon tomorrow.

The pair's visit to Dunedin is part of a nationwide tour to commemorate the 67th anniversary of the atomic bombing of Hiroshima and Nagasaki.

The development of the atomic bomb, known as the Manhattan Project and led by the United States, started in 1939.

The bomb killed about 70,000 people immediately.

Three days after Hiroshima, an atomic bomb was dropped on Nagasaki, killing about 70,000.

On August 15, six days after the bombing of Nagasaki, Japan announced its surrender to the Allies, ending World War 2.