After an eight-month restoration, Dunedin's historic Edwardian glasshouse will reopen to the public today.

The 110-year-old winter glasshouse in the Dunedin Botanic Garden has undergone a total refurbishment improving its structure and the environmental conditions.

Adding the final touches to the Dunedin Botanic Garden winter glasshouse is curator Stephen Bishop in preparation for the official reopening of the 110-year-old Edwardian building today. Photos: Gerard O'Brien
An official reopening ceremony will be held at 11am today.

Botanic Garden team leader Alan Matchett said visitors may notice the glasshouse felt more open than it had before but eventually the new plants would start to fill the empty space.

All of the glass had been removed so any rotten wood could be replaced and the whole structure given a new coat of paint, Mr Matchett said.

An upgrade of the louvre control system meant staff would spend less time maintaining and controlling the heat and humidity inside the glasshouse's three rooms, he said. 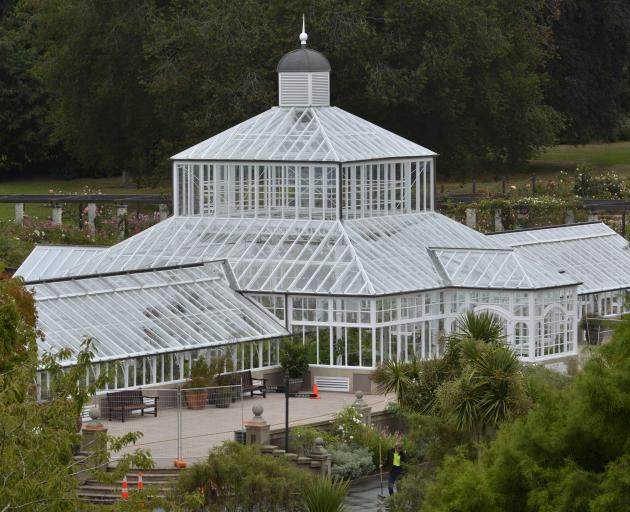 More than 700 plants have been replanted in the Dunedin Botanic Garden winter glasshouse after a $591,000 refurbishment.
The total cost of the refurbishment was $591,000 and was needed to ensure the garden retained its six-star status as one of New Zealand's top public gardens.

One of the garden's most infamous plants, the Amorphophallus titanum, or corpse flower, was still on display, though because it was not in flower there was no associated smell, he said.

''It's a pretty spectacular plant in its own right, flower or otherwise, and hopefully it'll be back flowering in a year or two.''

Winter glasshouse curator Stephen Bishop said he was unsure exactly how many plants were now inside the building but it would be more than 700.

Mr Bishop's next job was to catalogue and map all of the plants.

The 600,000 being about 7% of the amount spent on the latest splurge on bike ways in Dunedin.
I wonder which will get the most users? Even on a pro rata basis.