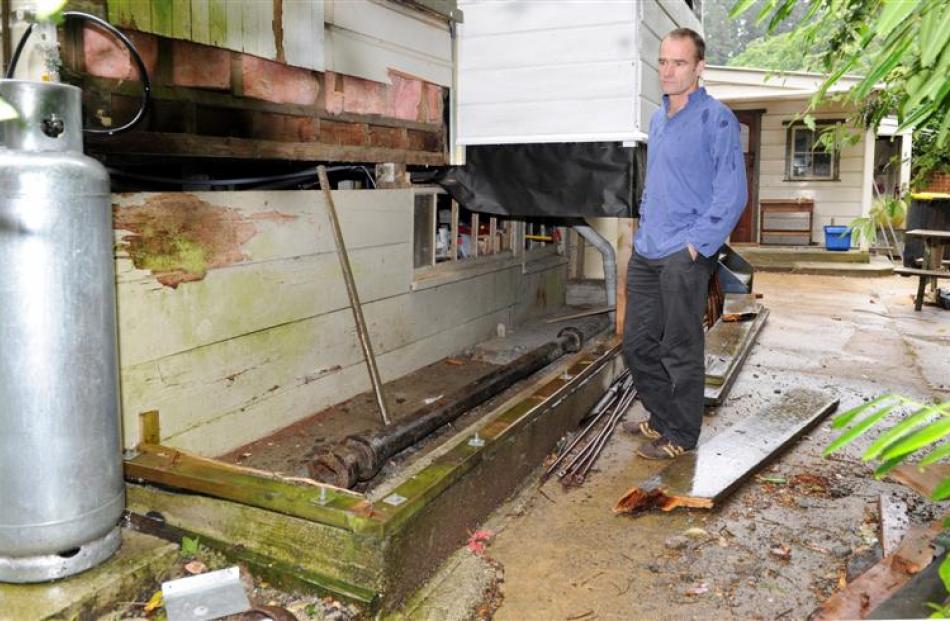 Chris Gable at the corner of his Malvern St home, which, it turns out, physically encroaches on a scenic reserve by 16cm. 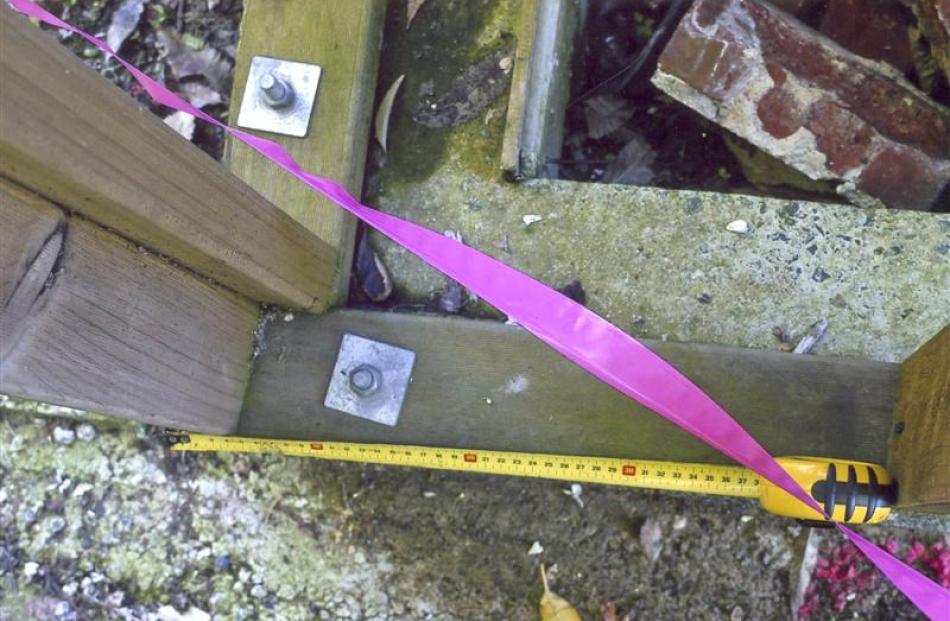 A pink ribbon indicates where the legal boundary runs through the corner of Chris Gable's home. Photos by Craig Baxter and supplied.

Dunedin man Chris Gable knows only too well the issues that arise when the authorities learn a property encroaches on a reserve - even if the property is a house that has stood for more than 80 years, and even if it only encroaches in one corner by 16cm. He told Debbie Porteous his tale of warning.

Chris Gable says he rues the day he tried to be helpful and inadvertently became involved in a process he views as ''bureaucracy gone mad''.

The father-of-two had started a renovation project extending the back wall of his 87-year-old Malvern St villa to the edge of a balcony at the rear of the house.

He bought the North Dunedin student flat in 2010 intending to turn it back into a family home.

He was not increasing the footprint of the house, he had received a building consent from the Dunedin City Council, and a building inspector had already signed off replacement foundations.

Then he decided to get a surveyor in to make sure a new back boundary fence to replace one that had been in place since 1877 was going up in the correct place.

That is where, he says, bureaucracy started to go ''mad'' and the building stopped.

The surveyor found the correct boundary of the property ran through a small corner of Mr Gable's house.

A 16cm triangle of the house was actually in the Woodhaugh Gardens scenic reserve.

The council, which was to pay half the cost of the fence, ordered him to stop building until the encroachment was resolved, either by removing it or formalising it.

That required an exchange of land, the purchase of some reserve land (a long and expensive public process) or a licence to occupy (which relies on the encroachment being pulled back).

Mr Gable pleaded to the council building control unit for leniency, without success. He complained to councillors about the decision, again without success, and eventually lodged a formal complaint with the Ombudsman.

The Ombudsman also found in the council's favour.

The situation, he said, was crazy.

After two years and thousands of dollars spent fighting the decision, and unable to afford the probable tens of thousands it would cost for a land swap or buying a piece of the reserve, he had decided to acquiesce and not carry out the renovations he had planned. He still believed he had a legal right under the Property Law Act in that no party was at fault for a wrongly placed structure and relief should be granted.

The council's position was that crown reserves were excluded from that Act and the Reserves Act, which required councils to act on the discovery of an encroachment on a reserve, applied. So too did the Building Act, which does not allow building across property boundaries. The Ombudsman suggested Mr Gable argue his position through the courts, but Mr Gable said he could not afford to do that.

While he is not going to build in that corner at the moment and may yet apply for a licence to occupy, to buy him some time on deciding what to do, Mr Gable says he is ''majorly ... [annoyed]'' with the way the council handled the matter and he wants other people to be aware they could have similar problems.

An architect prepared the plans for the building project and a building consent had been issued. The boundary with the Woodhaugh Gardens was shown on the council's public ''webmap'' as running behind the house, although the council would later rely on the boundary being correctly recorded on all files, including the webmap.

He felt he had done everything right, but it had backfired dramatically.

The battle with the council and ombudsman had caused Mr Gable significant financial and personal stress, and his partner had moved out as a result.

He described the council's position as ''institutionalised obtuseness''.

''Why do have they no in-built ability to review the facts?''He also despaired of what he called a lack of common sense.

''You'd think, under the circumstances, given the triviality, given the lack of public interest [in the land going back into reserve], given that I got the surveying done here to get the fence in the right place, that maybe [letting him build on the encroachment] would be the right thing to do.''

To the Ombudsman, he said: ''You can see why I am upset by this: I have acted in good faith throughout and yet ended up with something other than I thought I was buying.''

While the Building Act was clear, the house had been standing there for 87 years, he said.

''This is not a new build, yet the council seem to be regarding it as just this.

''There is absolutely no public interest in the persecution of myself and my family. The land gained by the council in this way would be of no practical use, unless they took to a number of native trees with chainsaws.''

Adding to his disappointment, the ombudsman stood behind the council, saying the Notice to Fix was not unreasonable given the council was required under law, once it became aware of any encroachment on a reserve, to have it removed or formalised.

Ombudsman David McGee further stated that had the council acquiesced in the building he was carrying out on the reserve, it would have been in dereliction of its public duty.

Mr Gable said the absurdity of the situation was compounded by the fact he was issued consent by the council's own building team, who also approved new foundations.

He was also infuriated by incorrect statements made by council staff in documents, including that the encroachment was discovered before he started work, that he was building a deck extension, and that he was extending the footprint of the building.

Building services manager Neil McLeod said he was not aware of the exact statements made by staff but, by his understanding, he generally concurred with Mr Gable about the type and timings of the building project.

However, even if mistakes such as those were made, those issues were irrelevant to the over-riding issue - that once an encroachment was discovered, even one that had existed for time immemorial, the council legally could not allow building to continue and had to have the encroachment removed or formalised.

In every case where the council became aware of an encroachment, it acted, he said. Any encroachments that existed were either historic or recent mistakes and existed only because the council was unaware of them. It was true that if Mr Gable had not had the survey done, probably no-one would have become aware of the encroachment. Regarding why a building consent was approved if there was an obvious encroachment, he said the Building Act placed the onus on the person applying for the consent to provide correct site plans.

If the council were to check the details of every plan submitted itself, the cost to ratepayers would be exorbitant.

In this case, the correct boundary would have been shown on available documents, including council files available to the public. It appeared the person drawing up the plans might have interpreted some dimensions incorrectly, leading to boundary issues not being identified at that early stage and the consent being issued.

Mr Gable pointed out that the council was required in its Town Belt Management Plan to ''proactively monitor and manage the removal and formalisation of existing encroachments''.

''Had the council done any proactive monitoring in the last 100 years or so, I would not be in the situation in which I find myself today. This amounts to dereliction of duty. Perhaps the time has come to take some responsibility for this.''

Parks and Reserves manager Mick Reece said the council did not have enough money to send staff around checking every boundary of a reserve. Once it was aware of an encroachment, it was proactive in resolving it. Recreation and reserves team leader Paulien Leijnse said her team, and everyone who had been involved at the council, was ''very sympathetic'' to Mr Gable's situation, but they had no choice. The law was the law and they could not ignore it.

''And we have been given the role of protecting that land for the Crown. In all aspects it's ours, except when it comes to selling it.''

The council usually dealt with fewer than 10 encroachments a year. Having a house across a boundary, as in Mr Gables' case, was unusual, as the issue was usually land.

Her best advice to people who owned, or were looking to buy, a property beside a reserve - and there were likely to be thousands of such properties in Dunedin - was to check the LIM, which would have instructions for such properties.

''We are not trying to be the bad guys here. We've tried to make it easy for people to find this information out, but people do need to go for a LIM or get a lawyer to check it out.''