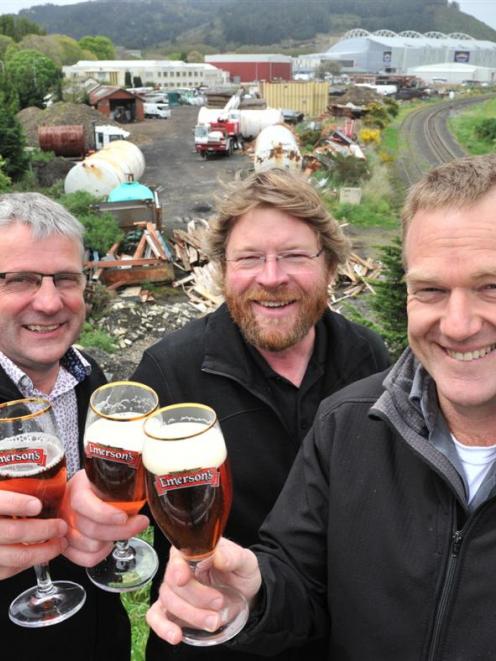 Emerson's Brewery general manager Bob King (left), founder Richard Emerson (centre) and brewing and operations manager Chris O'Leary raise a glass at the Hall Bros and Dunedin City Council land to which the brewery is moving. Photo by Linda Robertson.
An expanding Emerson's Brewery is set to become a ''world-class'' tourist destination now an agreement has been reached to buy a new site.

The development - expected to cost in the millions - will be open for tours and house a new brewery, warehousing, retail store plus a bar and restaurant.

The 22-year-old Dunedin brewery's purchase of two adjacent pieces of land in Anzac Ave, belonging to the Dunedin City Council and Cr Doug Hall, also resolves a long-running access dispute over the land.

The dispute between Cr Hall and the council has cost ratepayers more than $570,000 and prevented the council from switching on traffic lights at an intersection next to the site.

It will be the fourth move in Emerson's history and founder Richard Emerson was excited yesterday, saying ''Yahoo!'' when asked about the deal being finalised.

''Moving brewhouses and tanks is not new to us, but this time we want to create a place where people can touch, smell, taste and experience more about Emerson's and its story,'' Mr Emerson said.

With enough room to allow for decades of growth, Mr Emerson hoped it would be the last time the brewery moved.

It also secured the brewery's future as a Dunedin brand, quashing fears it could move north after it was bought by liquor giant Lion for $8million in November 2012.

''We love Dunedin and we are proud of being part of the Dunedin community,'' he said.

Operations manager Chris O'Leary said the new site would be a ''world-class'' tourist destination for beer-lovers.

''What we have designed is a place where people can come, have a beer, go for a tour and see the whole brewing operation,'' Mr O'Leary said.

''You will be able to be having a beer and see virtually the whole operation.''

''This way we will have a enough production capability to be even more innovative than we are now.''

As an added bonus, the site was next to a railway line, which would satisfy Mr Emerson's love of trains.

General manager Bob King said the shift would not have been possible without Lion.

The move would eventually create extra jobs, especially with the opening of a bar.

''The natural progression is that we are going to need additional people at some stage,'' he said.

The company never contemplated moving Emerson's out of Dunedin, or consolidating it with Dunedin's Speight's Brewery, on which it recently spent $40million upgrading and which also operates tours.

''For us it's all about retaining the authenticity of the brand and most importantly, we don't want to change what has made the brand so successful,'' Mr Glass said.

The investment was a ''big vote of confidence'' in the brewery and also another ''real commitment'' to Dunedin following the Speight's investment.

''This isn't about Lion getting in the way or doing things differently. It's really just about helping and supporting.''

Council infrastructure and networks group manager Tony Avery yesterday confirmed it had sold a small piece land, next to Cr Hall's larger site, to Emerson's, but said the amount was ''commercially sensitive''.

Temporary traffic controls would remain in place for safety reasons until Cr Hall's business vacated the site, after which traffic lights at the intersection of Anzac Ave and Frederick St would be activated.

A scheduled Environment Court hearing over the issue would be dropped.

Cr Hall had been in dispute with the council over access to his land for three years, after realignment of State Highway 88 during Forsyth Barr Stadium's construction.

In August 2011, Cr Hall obtained a High Court injunction preventing the council turning on the intersection's traffic lights because of his concerns over safe access.

Cr Hall declined to comment yesterday, saying he was too busy.