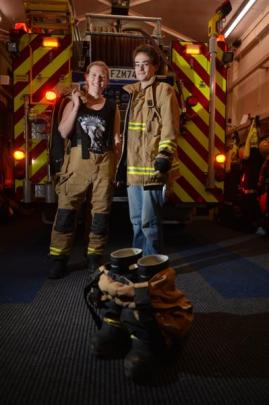 Dragging himself out of bed at 2am to pull on a firefighting uniform is all part of the routine for Dunedin PhD student Casey Davies.

Mr Davies [25], a chemistry student at the University of Otago, will collect a $10,000 Freemasons Postgraduate Scholarship at a ceremony in Christchurch today for his efforts with the Ravensbourne Volunteer Fire Brigade.

He was one of four Dunedin students to be awarded a scholarship.

Recently promoted to senior firefighter after five years with the service, Mr Davies has used his chemistry expertise to educate fellow firefighters in identifying and dealing with dangerous chemicals.

The brigade's training had improved markedly as a result, he said.

''The first hazardous chemicals night I had here was a bucket with something written on it,'' Mr Davies said.

''Then the next year when we were doing proper training, it was a full simulated P lab in my basement in my house.''

He was part of a chemistry outreach programme with the university's chemistry department and had taken ideas from that to use with the brigade, Mr Davies said.

''I've brought in liquid nitrogen, dry ice - relatively non-toxic things because we've still got to be safe but have some fun and see some proper chemicals and science.''

The volunteering had brought about some late nights for Mr Davies and his partner, Tessa Stewart, a third-year medical student who is also a volunteer.

''Usually you're still half asleep, trying to find your shoes, running down to the station to answer the radio,'' Mr Davies said of the late night callouts.

Apart from the all-nighters, it was not difficult to make time for both study and the fire service, he said.

The station received 50 to 60 callouts a year, and training was only once a week.

''My supervisor's absolutely brilliant. To be honest, if he was a hardcore person not letting me go [during callouts], then obviously I couldn't do this.''

Mr Davies leaves for Belgium on Monday to attend the International Conference on Chemical Kinetics.

He hoped to use the experience to network in a bid to get into the academic science industry.

The other Dunedin recipients were law and arts student Francessca Maslin and pharmacy student Brittney Young.