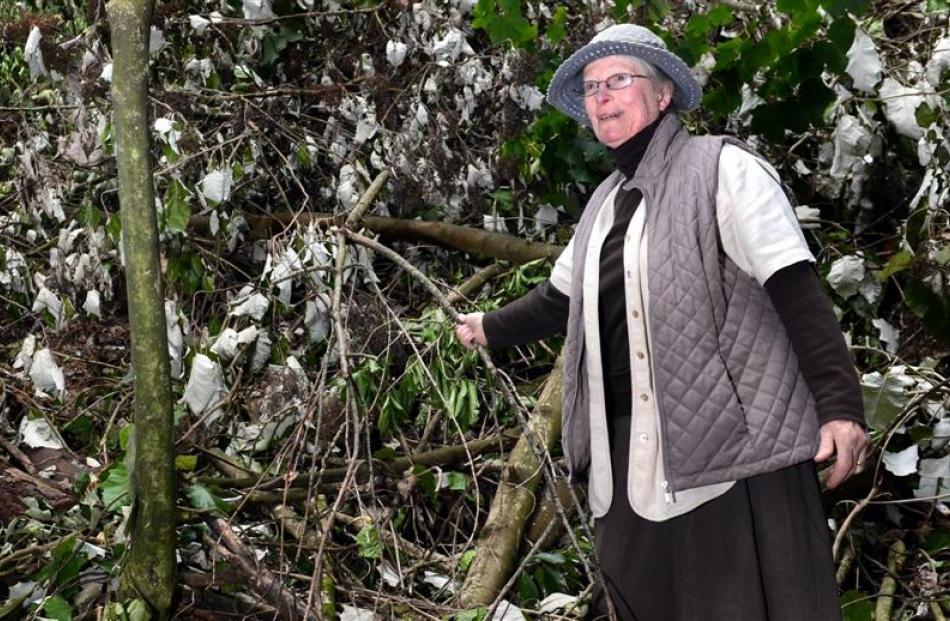 Mrs Petersen (79), who has lived near the Belleknowes park for the past 48 years and is a regular walker of nearby tracks in the Town Belt, said she was ''very upset'' by the continuing work.

And she asked in a letter to the editor if anything could be done to stop it.

She said ''swathes'' of broad-leafed coprosma, rangiora and, to a lesser extent, five-finger and karamu had recently been ''cut and slashed'' beside the bush walks.

And ''a ghastly mass of stumps and branches, rampant ivy, aluminium weed, blackberry and sycamore saplings'' had been left behind.

''Totally destroyed are the magical bush walks, large areas of medium-low cover for birdlife and the birdsong.

''In 48 years of walking this bush, I have never found the walk so silent.

''Some large sycamores had to be cut, but why this awful devastation?''

''Planting more astelia will not bring back the birds, nor can we wait another 10 years for regrowth of native trees,'' she said.

When the ODT visited the tracks this week, several sizeable areas of cut vegetation and some felled tree trunks were visible from the tracks.

Dunedin City Council parks manager Lisa Wheeler said the work was being undertaken by contractors and guided by ecological assessment undertaken for the council in 2005, with further planting to take place in autumn.

A new ecological assessment would be completed by the middle of this year.

Asked if the cutting could be phased over several years, to preserve the appearance of the bush, she said contracts would be reconsidered next year.

It was possible some future work could be done more gradually, she said.

The DCC should be concentrating more on removing exotic sycamore and hawthorn trees and less on cutting down native trees, such as rangiora, which were south of their traditional geographical range, he said.