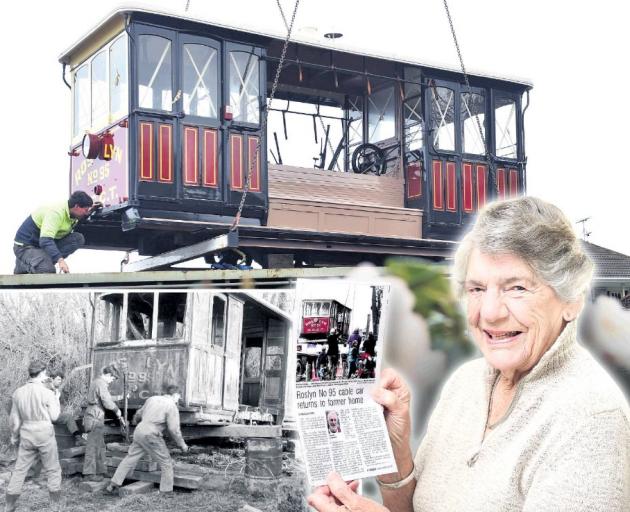 Roslyn No 95 being lifted into its new Mornington home last week; Tramway Historical Society members jack up the cable car for removal from Waihola in 1969; and Margaret Inglis with an ODT story about the cable car in Christchurch yesterday. Photo: Christchurch Star/ODT/Supplied
The latest cable car back in Dunedin to grace the proposed Mornington line was once a children’s playhouse nestled beside a Waihola crib.

Roslyn No95, which was lifted into the Dunedin Heritage Light Rail Trust’s Mornington shed last week, ended up there after being given to a bank employee by a man who owed him a debt.

It stayed at the Waihola crib from some time after it was decommissioned in the 1950s until it was  transported to Christchurch in 1969 by the Tramway Historical Society, before finally returning home.

An Otago Daily Times story on the cable car last week brought back memories for Christchurch woman Margaret Inglis, who also remembered the tram trip from Princes St to Mornington the trust plans to recreate.

Mrs Inglis, originally of Balclutha, lived in Dunedin when she was younger, and married Evan Inglis, of the family firm of A&T Inglis.

She said yesterday she bought  a property at Waihola for a holiday home. The man who owned the property before them worked for a bank.

"Somebody owed him a debt and couldn’t pay it.

"So he gave the cable car to him. That’s what we understood."

In the 1960s, a man arrived at the front door of the couple’s  Mornington  home, asking if they would allow the cable car to be taken to Christchurch for restoration.  She had since seen the car at Ferrymead in Christchurch, where it was restored by the society.

"It was most gratifying to see the whole thing restored.

"That was one good move I made, anyway."

Mrs Inglis said seeing the cable car returned to the suburb in which she used to live made her "very emotional".

"It was wonderful, actually."

Mrs Inglis, now in her 90s, said she used to ride on the Mornington cable car.

She remembered going up High St, and passengers getting off to change to the Maryhill line.

Her daughter, Janet Grey, of Taupo, said she had happy memories of playing in the cable car at Waihola as a child.

"All the seats were stuffed with horse hair.

"This is one of our most vivid memories, the birds used to come and pick holes in the leather seats and get all the horsehair out for their nests."

One of the men who travelled from Christchurch in 1969 to pick up the cable car was Tramway Historical Society volunteer and cable car enthusiast Bruce Maffei, of Christchurch.

"We went down with a lorry from Christchurch, jacked it up ourselves.

"That was the way we did it in those days. We didn’t have any money, you see."

All the other Roslyn trams had gone to Cromwell to be made into holiday cottages.

The restored cable car had seats sourced from Cromwell, its roof bell from a Dunedin tram enthusiast, and mechanism like brake levers  was fabricated at Ferrymead.

The restoration was completed about 20 years ago.