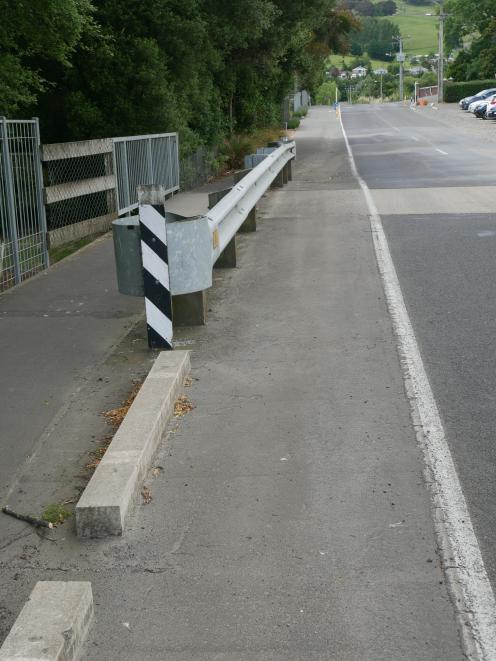 Concrete sleepers are positioned on the northern side of the bridge in Cemetery Rd, but not the other side.PHOTO: JESSICA WILSON
Plans to install more concrete sleepers in Cemetery Rd need to be moved forward to avoid ‘‘taking a gamble with children’s lives’’, a Mosgiel-Taieri Community Board member says.

At the board’s latest meeting, member Phillipa Bain raised concerns about the lack of separation between the road and footpath in Cemetery Rd, near East Taieri School.

On the northern side of the bridge there was a gap created by concrete sleepers, but on the other side there was nothing, she said.

Children used the path to walk, bike or scoot to school, she said.

‘‘It’s not a massive stretch. It’s just that wee bit from the bridge to the school.’’

Children would bike or scoot on the road to pass walkers because they did not understand it was a road, she said.

Council staff investigated the issue earlier this year and decided concrete sleepers from Portobello Rd would be repurposed and installed once uplifted. This was planned for 2021.

Mrs Bain said she wanted to ‘‘move that forward’’ and something temporary to be installed in the meantime.

Cemetery Rd was relatively narrow and used by large trucks, she said.

It would be the second round of upgrades and focus on category 4 playgrounds.

Category 5 playgrounds, those that had been in the worst condition, had already been upgraded.

Mr West said he would let the board know which playgrounds in the board area were category 4.

The board had previously suggested a tunnel be installed through an existing mound of earth in the Memorial Park playground, but no further action would be taken.