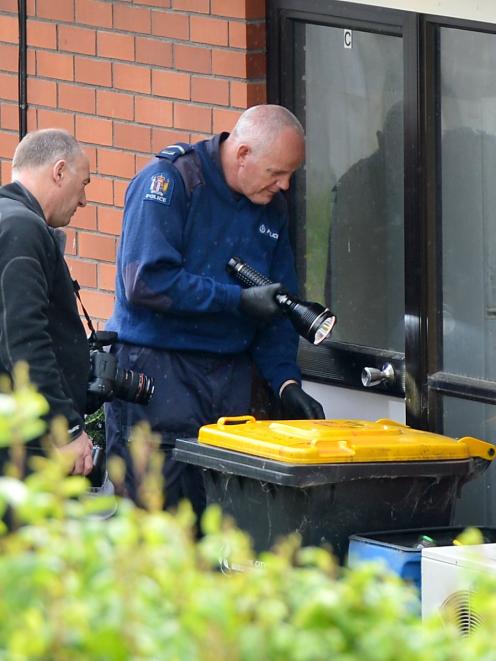 Police examine the property from which five rifles, 23 handguns and ammunition were stolen last week. Photo: Stephen Jaquiery.
A University of Otago professor has renewed his call for firearms to be registered.

The call was triggered by the theft of a Dunedin arsenal, which highlights  "major deficiencies" in New Zealand gun law.

Five rifles and 23 handguns, including several military-style semi-automatic firearms, along with ammunition, were stolen from a Maitland St property last week.

Prof Kevin Clements, of the University of Otago Centre for Peace and Conflict Studies, speaking to the Otago Daily Times from Washington DC,  said the "astonishing haul" of  firearms was a concern.

One deficiency was firearms should be registered, as firearms owners needed to be.

Another deficiency was the arsenal being in a position to be burgled despite police being satisfied with the security arrangements, Prof Clements said.

The Otago Daily Times believes a list of gun club members’ names and addresses was also stolen with the arsenal.

Prof Clements said without a gun register the number of weapons that had become vulnerable because of the stolen list was unknown.

He wanted the police to get club members to surrender their weapons, to be secured by police to remove any incentive for more criminal activity.

"At least set them aside for a certain period of time, or make them available on demand from the gun owners when necessary — that would be very helpful."

In a statement, a police spokeswoman said a gun register was being considered as part of the law and order committee’s inquiry into illegal firearms in New Zealand.

"Police are providing input to the committee where necessary and will consider the matter once the inquiry is complete," she said.

Police declined to comment further on Prof Clements’ concerns because the investigation into the burglary was ongoing.

However, access to the firearms was part of the investigation, she said.

"Police encourage anyone with any concerns for their property or own safety to contact us. Anyone with information about this burglary should also make contact."

Prof Kevin Clements claims "The crime highlighted "major deficiencies" in New Zealand gun law... One deficiency was firearms should be registered, as firearms owners needed to be" could not be further from the truth.

Claims that the firearms stolen are unregistered are untrue - with all pistol and E category firearms currently registered to their licensed owners through New Zealand. Firearm registration has also not been shown to reduce firearm misuse or trafficking, hence why it was disposed of in New Zealand for Category A firearms and recently in Canada, after a 17 year trial found it a waste of resources with no relationship in reducing firearm crime or homicide.

New Zealand firearm laws are world leading in striking a balance between community safety and allowing licensed, fit and proper persons with a genuine reason to own and use firearms. Our firearm homicide and accident rate has been in steady decline for the last 30-40 odd years and is extremely low for a western country (with firearm homicide per capita lower or on par with Australia) and this occurring without the registration of category A firearms since 1982. All points that Prof Clements fails to mention.

Sadly Mr Clements has no knowledge of the current gun laws. MSSA's Pistols and Collections are ALL registered firearms, Every one of the firearms stolen by those low lifes are registered against his firearms license and ARE recorded on the police licensing database.
Pays to check facts first Mr Clements....

Kevin Clements should get his facts straight before putting pen to paper and your editor should check that what he is writing is true,
The 23 pistols that were stolen were registered and so were the so called Military Style Semi-Automatic rifles,
Firearm registration has failed everywhere it has been tried, in Australia the gun crime is higher than before the buyback that cost the tax payers millions,
In England the country is awash with guns from eastern Europe, Registration didn't stop the terrorist attacks in France and Belgium,
And it won't stop the criminals getting guns here they steal them import them with their drugs if they can't get them they will make them, any small machine stop can turn out functioning firearms,
Our Firearms laws are more than adequate it's the courts that are failing by handing down soft sentences the only change we need is for mandatory sentences for firearms crimes if they are long enough the criminals will think twice before picking up a gun, as it is now they can get away with it, knowing the gun crime sentence will run concurrently with that ever else they are sentenced for not consecutively as it should be,

How well does Prof Clements know the current firearms legislation in this country? Does he actually realize that the firearms in this particular case were of a category that DOES require them to be registered? And that legal owners of firearms in these categories are already required to meet more stringent licensing conditions, applications and storage and security measures in order to be licensed? What this highlights to me is a) registering firearms will not stop CRIMINALS from stealing them, and b) if those criminals want something, they will go to extreme measures to smash in and grab it. There is already a a system in place where new firearms bought at a retailer are recorded under that licensed buyers name and address, so can be tracked if need be. Formal registration as such does not work. It is an expensive and unmanageable undertaking and does little to prevent illegal use of firearms - look at Australia and Canada for example, millions spent for little benefit. Putting heavier restrictions and more legislation on law-biding firearms users will not prevent or reduce illegal firearm activity. Unless criminals start taking notice of the law, which is bit of a joke in itself.