Camping bylaw gets board's thumbs up 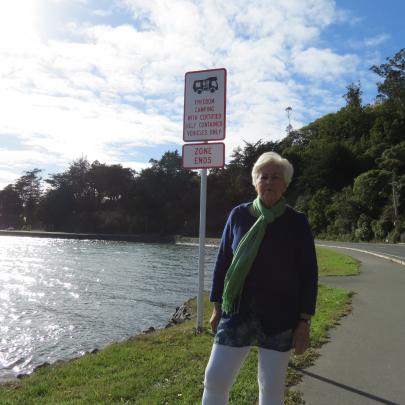 Spelling it out ... Otago Peninsula Community Board chairwoman Christine Garey says signs, like this one in Macandrew Bay, have helped clarify where campers are allowed to stay overnight. PHOTO: DAVID BECK

Despite well-reported issues in other areas, Dunedin's freedom camping bylaw is working well in one of the more heavily restricted areas, Otago Peninsula Community Board chairwoman Christine Garey says.

"It has certainly dealt with issues here for managing the freedom camping more effectively," she said.

Under the camping control bylaw, which came into effect last November, only those with fully self-contained vehicles can camp on the peninsula.

They can only park in areas marked by signs installed as part of the freedom camping bylaw process.

Freedom camping was monitored to make sure rules were followed. Those found to be breaching the rules were liable to an instant $200 fine.

"The council has done a fantastic job of researching where it has worked well in other parts of the country and implementing it for this area," she said.

The ability to fine those who broke the rules "gives the bylaw teeth".

The blue penguin tours were usually held at sunset, and staff were often asked by visitors if they were allowed to stay overnight in the car park.

"They can't camp here and our tour guides let them know that at the start," he said."They can explain the rules and point them in the direction of areas where it is allowed."

In the past three or four months, about 100 people had taken the tours, with up to half in camper vans.

"They are certainly leaving here and there are a couple of areas between here and the gap between Portobello and Broad Bay ... that have been filling up with camper vans," he said.

Signs put up by the DCC had helped but some visitors still chose to ignore them or did not see them.

"I suppose if you're driving around this end with the steep drop-offs, you're probably not spending a lot of time reading things on the side of the road. You're watching the road."

He suggested signs could be painted on the road in areas where drivers were heading into a no freedom camping zone, as they were more likely to be seen.

Council parks, recreation and aquatics group manager Richard Saunders said the bylaw had helped the council achieve what it wanted on the peninsula.

The aim of the bylaw was to find a balance between providing for visitors to the city while protecting the environment and the community from any negative effects of uncontrolled camping.

"We've had some conversations with the community board about how much information is on the signs, about whether there is too much," Mr Saunders said.

"There are some new signs going up shortly which we think are much clearer for campers."

The peninsula was the most restrictive area in the city for camping.

"Historically, it has been a very popular site in the last few seasons but the decision was made to heavily restrict camping on the peninsula. I think the outcome has been positive."

The bylaw would be reviewed between seasons to find out what could be improved, he said.