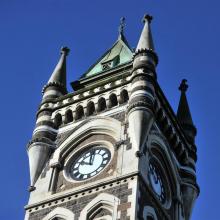 Photo: ODT files
Work on the proposed $5million to $7million upgrade of the safety and accessibility of Dunedin's campus area has moved to the next step as the council asks staff to look at funding options.

That report will be made to the council next year.

The upgrade, which will include improving streets surrounding the University of Otago and Otago Polytechnic, establish the area as a destination and link the area with cycleways, was supported by all councillors.

How the $5million to $7million cost would be split between project partners, the Dunedin City Council, University of Otago and Otago Polytechnic, was yet to be determined.

A report on investment options, approaches to improving the character of the tertiary area and the safety and access issues of the project was completed by Chow Hill and Flow Transportation in 2014.

Cr Benson Pope said the project had a ``clear and long history'' and a lot of talking had been done about it, now it was time to put a plan into action.

Crs Lee Vandervis and Rachel Elder asked acting transport group manager Richard Saunders what effect the proposed upgrade would have on accessibility to parking in the area.

Although there would be ``an effect on parking somewhere'', the council would work with both tertiary providers to ensure adequate parking was available to people using amenities, including Dunedin Public Hospital and kindergartens.

A budget for the project would not be finalised until the council's long-term plan next year, but there was money in the budget for minor improvements needed in the area.

Otago Polytechnic had provisionally set aside $1.5million in its 10-year capital budget plan for the project and support for the project from the university was evident in previous contributions, councillors heard.

For the words "establish the area as a destination " read block access to through traffic and ignore the rest of the citizens.

Not a lot of point worrying about lack of parking. DCC obviously don't care when they are busy selling off car parks and getting rid of on street parking as fast as they can. Council seem to think we will cycle to hospital with our broken legs.

How can anyone consider the impact on Dunedin Hospital when no one will admit where the new hospital will be?

This is still just a vanity exercise that Dunedin can't afford. Where is the money coming from - the rate payers of course, one way or the other.