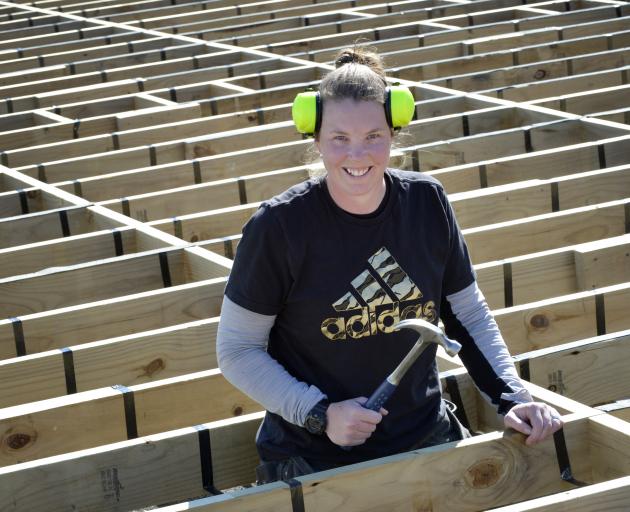 National Association of Women in Construction Excellence Awards finalist Kirsty Currie at work. PHOTO: GERARD O'BRIEN
Two Otago Polytechnic graduates are building a future for themselves in the construction industry, and have been nominated for national awards.

Kirsty Currie and Anna Winskill-Moore are both finalists in the National Association of Women in Construction Excellence Awards.

Ms Winskill-Moore, who recently completed the New Zealand certificate in construction trade skills at Otago Polytechnic, is employed as a building apprentice with Osborn Brothers Building and Construction Ltd.

She had been working in an administrative field before deciding to go to polytechnic.

Being a mature female student in the construction field was not common, but the prospect of turning 40 while being "in a job I didn't love" fuelled her drive to make a career change, she said.

"I felt if I didn't do it now, I probably never would, so I bit the bullet and jumped.

"I think I'm most proud that I haven't let societal attitudes and expectations hold me back from pursuing a career in construction," she said.

"It's hard not to compare myself [with them]."

Her bosses had assured her she would improve a lot in a couple of years, she said.

Ms Winskill-Moore said her inclusion as a finalist in the Student or Apprentice Excellence section had been very encouraging.

Ms Currie is about to complete her second year as an apprentice for Dunedin firm Beelee Homes Ltd, and said she was "constantly learning" and had been given some great opportunities.

"My apprenticeship involves completing modules, but I have also been fortunate enough to become a peer tutor for other apprentices in the programme and am helping them with literacy."