Happy to graduate after overcoming challenges

By John Gibb
0 Comments
Once only a heartbeat away from disaster, Kathy Howard has plenty to celebrate when she graduates from Otago Polytechnic today.

"I never ever imagined myself gaining a tertiary degree," she said.

Miss Howard (31) first came to Dunedin and the polytechnic from the West Coast in 2015, not knowing anyone in the city.

She arrived with informal skills she had built up as an adult, including helping with complex fishing quota paperwork for fishing boats. But her formal educational background was limited, after leaving school at 15. 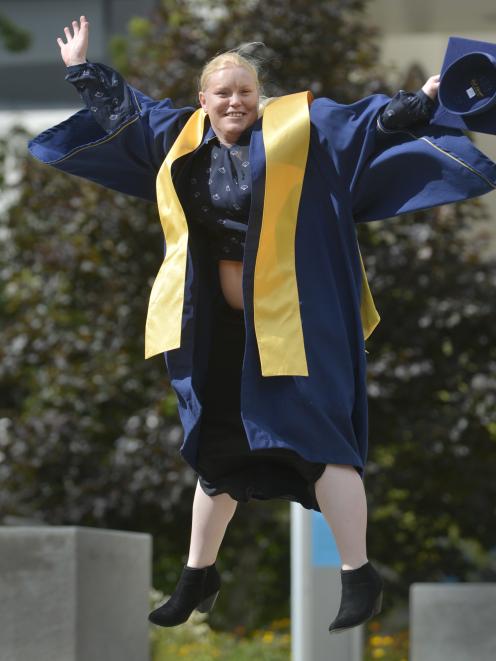 Kathy Howard (31) prepares to graduate from Otago Polytechnic. PHOTO: GERARD O'BRIEN
She had been also born with a rare medical condition, in which some of her organs were initially outside of her body, and she later experienced some complications and health challenges.

While working part-time at a Dunedin rest-home during her studies, late in 2015, she contracted pericarditis - an inflammation of the lining surrounding the heart.

That illness led to her heart stopping briefly at least eight times over the next few years and she was several times admitted to hospital.

These days, her overall health was "pretty all right".

"Every day is a blessing," she said.

Another challenge was previously undiagnosed dyslexia, which was identified by polytechnic staff.

She has since completed a bachelor of social services degree, specialising in counselling.

She will be at the front of today's 11am polytechnic graduation parade as it heads along George St, as she has been deputy chairwoman of the Otago Polytechnic Students Association (OPSA) this year, as well as filling the role of OPSA welfare officer.

She thoroughly enjoys counselling, and had now become a provisional registered counsellor, and an associate member of the New Zealand Association of Counsellors.

"I find I'm able to relate more to other people through different circumstances I've been in, in my life."

She is grateful for all the support she has received, including from the polytechnic as well as from her family, including her father, Buller Mayor Garry Howard.

That support, and her own positive attitude and sense of humour have helped her survive and flourish at the polytechnic.

"All my conditions, and what I've been through, I've seen as learning opportunities," she said.

"We all have our own journeys. For me I'm quite proud of where my journey is now. I've overcome a lot," she said.

As her love for counselling suggests, her efforts at the polytechnic have not been all about herself.

"I've loved my time with OPSA," she said.

She had always enjoyed "being able to help other people".

And her own life challenges had also "helped me grow".