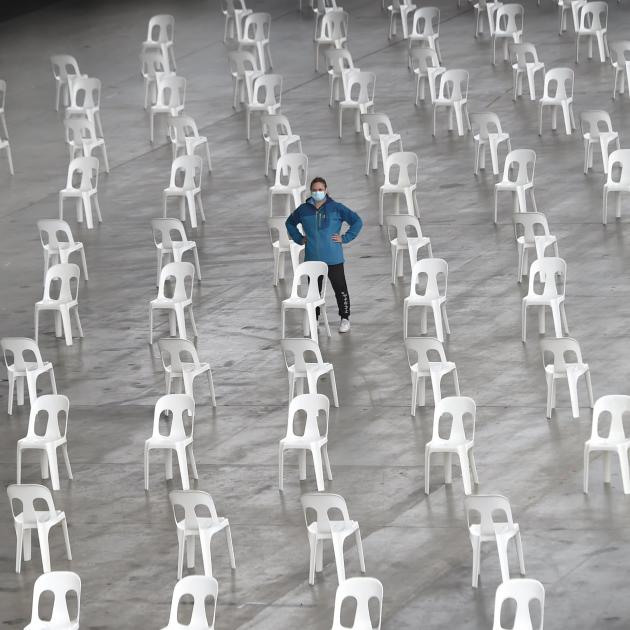 Te Kaika systems co-designer Raewyn Nafatali is ready for today and tomorrow's mass vaccination centre for Dunedin's students at Forsyth Barr Stadium in Dunedin. PHOTO: PETER MCINTOSH
The team that delivered more than 10,000 drive-in Covid vaccinations at the Edgar Centre this month has shifted to Forsyth Barr Stadium to shore up the immunity of Dunedin’s student population.

Te Kaika systems co-designer Raewyn Nafatali said the mass vaccination clinic opening this morning at the stadium was designed to deliver up to 6000 doses in two days — today and tomorrow.

The team had learned a lot after being nearly run off its feet on the first day at the Edgar Centre earlier this month.

The team averaged more than 1000 doses a day in its 10-day run, Mrs Nafatali said.

Now, patients would register outside Forsyth Barr Stadium and then be brought in in cohorts, or "pods", of about 30 people, she said.

Patients would sit facing others about to receive their Covid vaccination.

While each vaccinator would have a team of two administrators and an observer with them, the people facing each other would be able to keep an eye on others in their pod during the period of observation when patients might have an adverse reaction, she said.

Over the past week at the Edgar Centre, those most likely to appear faint after their vaccine injection were young men, Mrs Nafatali said.

"The females were a little bit tougher with it."

There was a sectioned-off area, with a doctor and nurse at the stadium, but the vaccination team had not seen anyone who needed it yet, she said.

Health provider Te Kaika is a partnership between Ngai Tahu, Arai Te Uru Whare Hauora and the University of Otago with support from Pasifika, low-income and refugee communities.