By Hamish MacLean
0 Comments
Food waste is a major problem, but staff and students at the University of Otago are cooking up some sweet solutions.

She ate oat crackers made from the fibrous leftovers created during oat milk production, she ate dairy-free blueberry ice cream made from blueberries that were not up to an otherwise marketable standard and she ate bread made of 50% recycled bread.

Dame Juliet said the focus of her investigations this year was: food rescue, food loss, and food waste.

To that end she spent two days in Dunedin this week talking to academics and industry partners about food waste innovation.

"It’s a massive issue globally: the statistic that people pull out is that if food waste was a country, it would be the third biggest emitter," she said.

Not only was methane emitted from landfills but if people wasted food, they were wasting the emissions that came from both transporting and growing it and they also wasted the water used to grow the food. 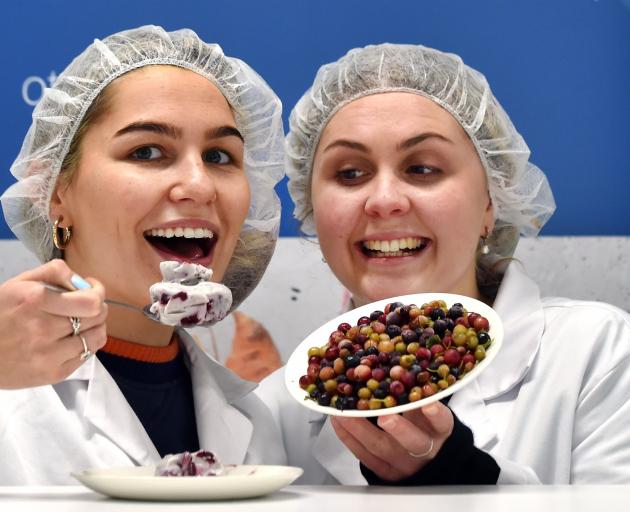 Food science and marketing student Georgia Mcintyre (21, left), of Christchurch, and food science and nutrition student Ella McCabe (21), of Hawke’s Bay, have turned blueberries rejected for sale into ice cream and other foods at the University of Otago’s Upcycled Food Lab. PHOTO: PETER MCINTOSH
"The less we waste, the smaller our carbon footprint," she said.

Her work extended from trying to prevent loss on farms to making sure that healthy food went to people and not the landfill, or that food that was not safe for human consumption went to animal feed, or on to compost, instead of a landfill.

"There are people here who are experts in food rescue, and are really focused on the social aspects of that, there are people that are looking at land-use and changing the environmental stewardship pictures ...

"There are people working on innovative products like ‘this’ so that if you really can’t rescue the food, you can upcycle it, add value, and do something clever.

"I think we’ve got a really unique opportunity to pull all the parts of the system together, really try to create a circular food economy so we waste as little as possible."

Food science head of department Prof Indrawati Oey said people today were used to having processed food on demand, but in "the olden days" food was more often produced at home and byproducts were used in food preparation.

People were realising that the byproducts from a product could also be commercialised.

Upcycling food had led to a "booming" market, she said.