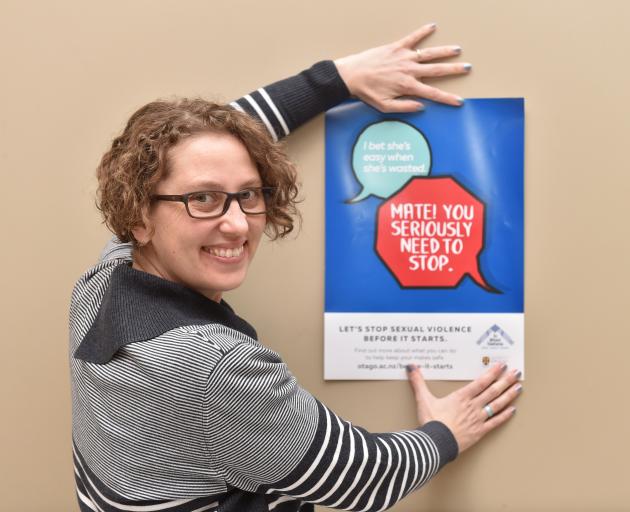 A marketing campaign aims to give students the confidence to speak up for others where inappropriate sexual behaviour is occurring or could be imminent.

"Before it Starts" has been produced by the university’s Sexual Violence Support and Prevention Centre, Te Whare Tawharau.

Its launch at the Dunedin campus coincides with Re-Orientation week and the start of the second semester.

Associate Prof Beres said the campaign highlighted problematic rape culture attitudes, such as "Look how drunk they are, I’m gonna make a move", and offered ways to interrupt, such as "I’m gonna have to stop you there".

Prof Beres is a sociologist who researches prevention of sexual violence.

"In order to change and reduce sexual violence, we all need to get involved," she said.

Researchers worked with student focus groups to develop six situational awareness posters for the campaign. It sprang out of an examination by Te Whare Tawharau research manager Katie Graham of the reasons behind student reluctance to attend voluntary sexual violence prevention workshops.

Ms Graham said some students seemed to understand sexual violence as an individual rather than a community problem, or something that did not affect them directly.

The marketing campaign communicated to students that sexual violence was a community issue and bystanders could have a positive impact in preventing it.

The university was itself criticised last year for the way it handled sexual assault allegations.

Several students or former students said allegations were not taken seriously enough. The university denied this and complained to the Broadcasting Standards Authority about the way television media reported the issue and the authority upheld aspects of the complaint.

The university has strengthened its stance against inappropriate sexual conduct in recent years; Te Whare Tawharau was established in 2018 and the university brought in a sexual misconduct policy last year.

Prof Beres said students who attended voluntary workshops about sex and consent were sometimes surprised by how much they learned.

Some had felt they knew enough already on the subject but were surprised the material was more complex than what they encountered at high school.

The campaign would run for the semester but was designed so that it could be built on in future.