'Plenty of spin': Winston Peters shows off his ping-pong skills in viral video

0 Comments
Deputy PM Winston Peters returned to the campaign trail yesterday in Otago, and a brief foray into the high-stakes world of ping-pong resulted in perhaps the most dramatic political video of 2020.

Peters shared the video himself on social media, complete with an obscure quote from tennis superstar Rafael Nadal.

With flash editing, slow motion and a stirring soundtrack, the video shows the veteran campaigner engaged in an epic battle with a much younger opponent.

With a wicked backhand and a powerful serve, the deftly-edited clip gave the impression of an athlete at the peak of his powers.

The video garnered the desired attention on social media, though not everyone was impressed with Peters.

"Rather see a rematch of Q&A with @jacktame," said one critic. 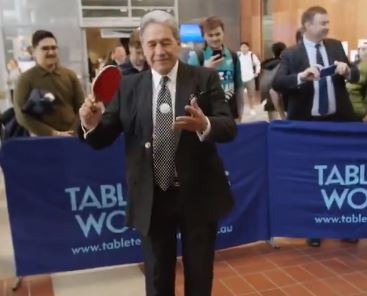 Winston Peters took to the table tennis arena to show off his skills. Photo: NZ First

Another noted that Peters had used "plenty of spin" in the match.

Others said that the wily politician had shown "mad skills" and noted that the video was "the political content we deserve".

Surprising then, given the fine form that Peters showed, that the NZ First leader is yet to pick up the bat and take on the Herald's Steve Braunias in his Ping Pong Politics series.

Despite appearances from such political luminaries as Jacinda Ardern, Simon Bridges, Chloe Swarbrick and Billy Te Kahika Jnr, Winston Peters has so far declined to face off against Braunias.