By Elena McPhee
2 Comments
Philosopher Jim Flynn is no stranger to controversy, having been fired from universities in the United States for views deemed too liberal.

However, his rejection by a UK publisher for potentially inciting racial and religious hatred with his book on free speech on campus has left him scratching his head.

The University of Otago emeritus professor and IQ expert's book In Defense of Free Speech: The University as Censor, was turned down at the last minute by Emerald Press due partly to legal concerns around the inclusion of scholars with inflammatory views. 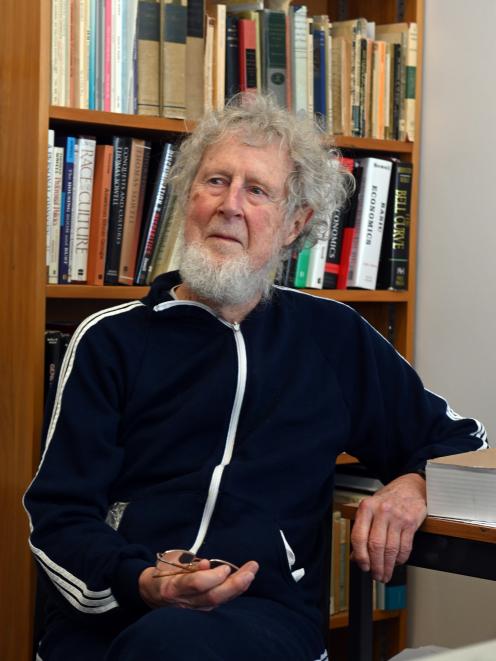 University of Otago emeritus professor Jim Flynn was surprised a publisher's lawyer considered his book could promote racial and religious hatred. PHOTO: LINDA ROBERTSON
A letter from the publisher said Emerald's concerns included the potential for circulation of the more controversial passages of the manuscript online.

"It's a rather ironic situation ... The book itself is defined as no longer permissible speech," Prof Flynn said yesterday.

"I wasn't surprised they sought a legal opinion, but I couldn't imagine anyone would interpret Great Britain's hate speech laws, which were meant to ban people from going online and saying `kill all Muslims' or going online and saying `shun black people' ... would be stretched to the point where ... even though you've only stated [views of other authors] to be refuted, it's something that may be interpreted as hate speech."

The theme of his book was many academics, particularly in America, did not feel free to speak their own minds due to a "party line".

"They feel terribly insecure because of student informants, and secondly, many departments take a dogmatic position," he said.

Prof Flynn said a distinction had to be drawn between unpopular opinions and incitement to violence or to otherwise discriminate against a particular group, which was unacceptable.

The nature of free speech was it would "always hold the danger that someone will think the irrational side has won".

Prof Flynn said he had already had approaches from publishers in other countries including the US and Canada.

Yip. No surprises there.
Those that have been deemed to be hate speakers in the UK, have been saying this for some time. Let's hope these 'hate speech' laws don't become part of NZ society.
Major wars, with millions killed have been fought to give us the open, demoncratic, free speech society we enjoy now.
Let's hope we don't have to go down that path again.
Lest we forget !!!

Only, less demon and more demo in the cratic.