Remediation work under way on plaza 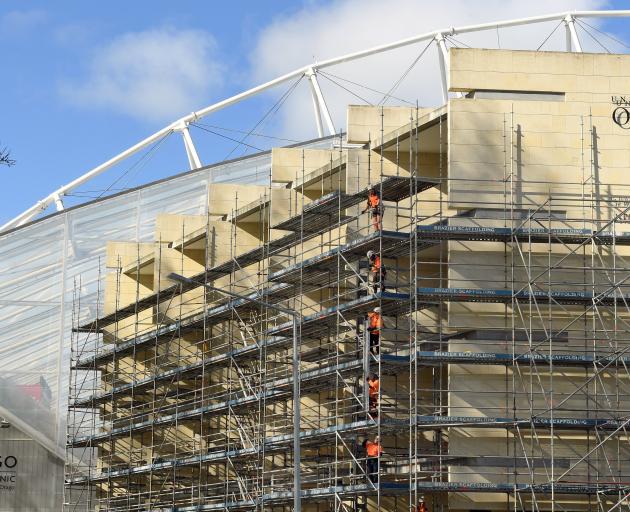 More than $1 million has been spent on repairs and maintenance of the University of Otago’s Plaza Building over the past eight years.

University of Otago property services division director Dean Macaulay said "bearing in mind contractual obligations", the university had spent $1.25 million on repairs and maintenance of the building and $1.14 million on capital expenditure since the building was completed in accordance with the construction contract in 2012.

"These costs include general repairs and maintenance (reactive, preventive and compliance-related costs), and capital upgrade-related activities."

The $42 million building, built by Naylor Love, houses the Unipol gym and the University of Otago’s language centre and foundation year facilities.

In 2013, cracks began to appear in sections of the Oamaru stone facade at the northern end of the building, and exterior cracks were found in the precast concrete beams in the southwest corner.

The faults did not make the building unsafe, but hoardings were erected as a precaution.

Other faults were found, including noise leaking from the gym to office spaces above.

Naylor Love and the university were now working together to future-proof the building, to make maintenance easier and help stop birds affecting the roof.

Mr Macaulay said the project involved replacing Oamaru stone tiles on the northern facade with terracotta tiles, which would look similar but were not as heavy.

The project also aimed to extend the northern roof’s low parapet and add handrails, and add a gantry (platform) to the roof above the atrium in the language centre and foundation year facility.

A bird sounder was being added to the roof to help scare away birds.

Naylor Love Dunedin Ltd director Jason Tutty declined to say how much the company had spent on remedying the building’s problems.

"This information is commercially sensitive."

Both Mr Tutty and Mr Macaulay said they were unable to comment "due to contractual reasons" when asked if the stone facade had been attached incorrectly, if the stone was the wrong product for the facade, if it was too heavy or if land movement had been a problem.

Parkside Quarries supplied the stone and is the only supplier of Oamaru Stone in New Zealand.

Manager Shane King said he did not want to get involved in "the politics" of the situation, but wanted to ensure his stone was not seen as the source of problems.

"We took great pride in supplying the stone to such a project as the Dunedin stadium, particularly so with this being in our own backyard.

"We’re very disappointed to see the stone being removed.

"We are very concerned that with the publicity this is attracting, people may perceive there's fault with our stone, leading to the removal of it.

"This could not be further from the truth."

He said many buildings in Dunedin built in the early 1900s with Oamaru stone were still standing the test of time.

The quarry had never recommended the fixing methodology used on the stadium in combination with its stone, nor would it.

"It relies heavily on the stability of the superstructure.

"Put simply, if it was faulty stone, we'd be replacing it. But we don’t believe it’s the stone that’s at fault."

It was hoped the future-proofing work on the building would be completed this year.

Mr Macaulay could not say how much the work would cost because it was "commercially sensitive".