Success is sweet but comes without added sugar for "Team Turmeric" at the University of Otago, which has been working with a Samoan company to create a healthy base for turmeric lattes.

Work began two years ago via Pacific Trade Invest, assisting economic development in the Pacific by developing and promoting businesses.

Professional practice fellow Fiona Nyhof said the food product development team at the university had worked on 12 projects with companies this year.

While most were confidential, ELife Wild Turmeric owner Etu Tusitala was happy for the students to speak and ready to promote the wild turmeric product, which was launched on Tuesday. 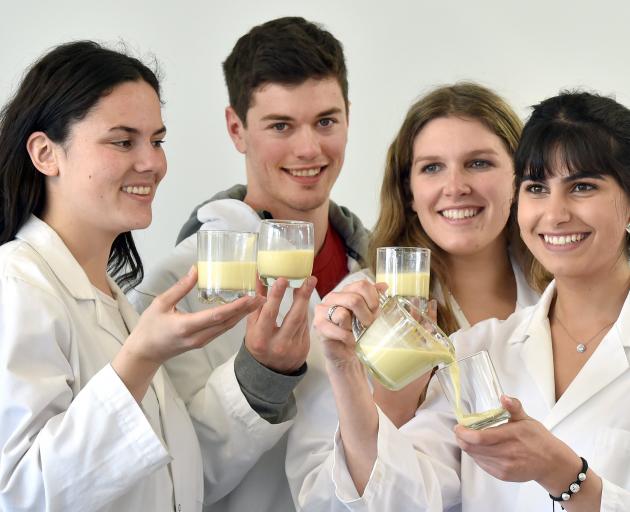 University of Otago food science department students (from left) Annabel Harnett (21), James Murphy (21), Roisin Storm (21) and Sura Obeidat (22) prepare to sample their product. PHOTO: PETER MCINTOSH
"He was very, very excited by it; he said that he really liked it. He's thrilled really that it's without the sugar and has a really good flavour," Mrs Nyhof said.

While turmeric has been marketed in various forms, Mr Tusitala said he understood his company, run with his wife Elena Tusitala, was the first to produce the organic turmeric juice used in the base, created from the abundant wild turmeric that grew in Samoa.

The effects of turmeric were similar to those of caffeine in terms of waking people up - but the drink had anti-inflammatory properties and would hopefully eventually be widely accepted as an alternative to coffee, Mr Tusitala said.

Two versions were made by the students; one unsweetened and one containing natural sweetners.

Turmeric did contain some natural sugars, which were still present in both versions of the concentrate, Mrs Nyhof said.

Mr Tusitala said he had been supplying a London cafe which sold upwards of 100 turmeric latte drinks a week since 2018 - when a team from last year's cohort of food science students began work developing the product, creating a spiced version.

Student Sura Obeidat said the new version of the concentrate had taken about seven months to produce.

"Our sponsor was looking for a sugar-free version to appeal to more health-conscious consumers, who are our target market ."

Mr Tusitala said he was seeking investors to collaborate with on the product, and was hopeful some opportunities might open up in New Zealand.