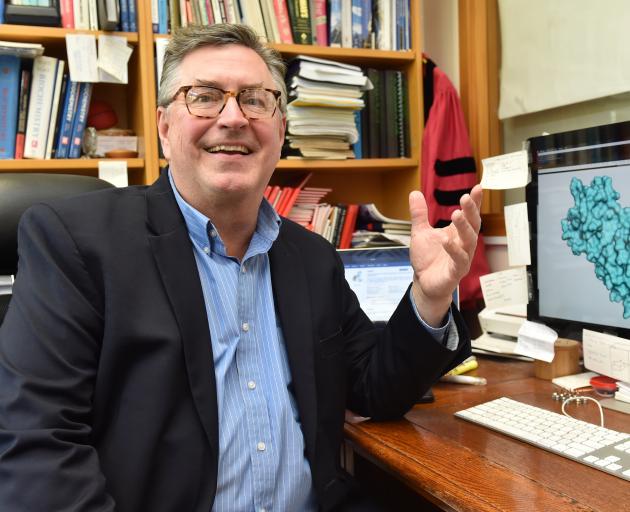 Prof Kurt Krause with an image of a coronavirus protein used in reproduction. PHOTO: GREGOR RICHARDSON
Despite several advantages in the fight against Covid-19, New Zealand faces the challenge of "silent spreaders"— people without symptoms who can spread the disease, Prof Kurt Krause says.

Facing the virus was "scary" because much about it was still unknown, Prof Krause, of the University of Otago’s biochemistry department, said yesterday.

Prof Krause was the inaugural director of the university’s Webster Centre for Infectious Diseases.

The country had taken "sensible" steps to counter the spread of the virus, and the pandemic plan was being led by good people and supported by a well-trained medical system.

New Zealand had five cases of confirmed disease and they were being managed very carefully.

"We’re facing a challenge but if we work together, we’re going to make it through," Prof Krause said.

More than 110,000 Covid-19 cases have been confirmed throughout the world and major outbreaks have occurred in central China, South Korea, Italy, Iran, France and Germany.

More than 3800 people have died, more than 3100 of them in mainland China, where the number of reported new cases is falling.

"We can learn a lesson from the success that China has had," Prof Krause said.

"With careful measures, it may be possible to contain the spread."

Prof Krause said that if human clinical trials were successful, the first vaccine could become available in a year to 18 months.

Vaccines were being developed in several countries, including the United Kingdom, Australia, the United States and China,

Moderna Therapeutics, a US biotech company, had produced a vaccine that would begin clinical trials by next month and was ahead of the other international work.

Several existing drugs already developed for other purposes were also undergoing clinical tests to check if they could be "repurposed" to act directly on the virus.

If successful, they could bridge the treatment gap before a vaccine became available, he said.

He urged good hand hygiene: careful washing of hands, maintaining a metre separation from other people, and avoiding touching surfaces and then touching the mouth or face without first washing hands.