Candidate groups may come to fore 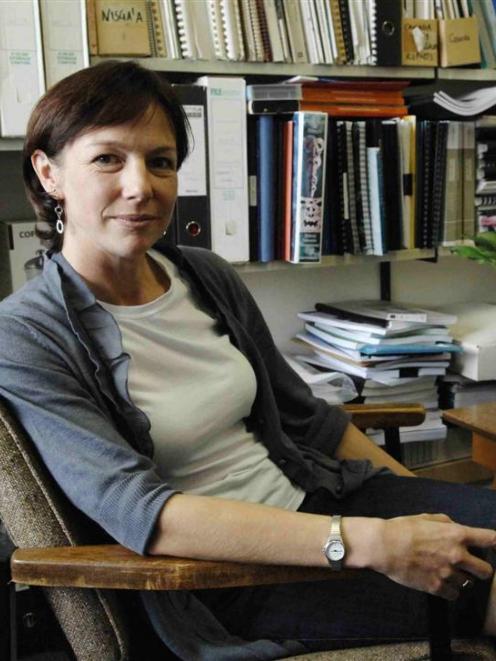 Associate Professor Janine Hayward says it is critical candidates make themselves known to as many of the voters as possible. Photo by Linda Robertson.
With changes to Dunedin's ward system creating a large urban ward for the central city, sitting councillors and new candidates are reviewing their options for the campaign ahead. David Loughrey reports.

Success in politics rests heavily on having a name that voters recognise.

While that has always been the case, changes to the ward system in Dunedin this year will mean more candidates to choose from across a wider area.

University of Otago political studies lecturer Associate Professor Janine Hayward says those choices will be made in an environment where many people do not put in the work to inform themselves about the candidates and the issues.

"Regardless of what they're saying, candidates just need to be known," Assoc Prof Hayward said.

"It will be absolutely critical candidates can make themselves known to as many of the voters as possible."

One possibility, used successfully by Greater Dunedin to win seats for Crs Dave Cull, Kate Wilson, and Chris Staynes, is working together on a political ticket.

Before the last election, the success of a group had not been seen since 1998, when Cr Richard Walls and Malcolm Farry gained seats on the council after campaigning as Team Dunedin, with six others.

Before that, candidates as far back as 1930 stood under the Labour Party banner with their main rivals the centre-right Citizens Association.

Unlike some other centres, Dunedin has been free of formal factions in recent years.

Asked whether more groupings of candidates was likely, Assoc Prof Hayward said there was a "real resistance" in Dunedin to candidates standing on tickets with affiliations to national political parties.

"Party politics is a big no-no," she said.

Why that was, she did not know.

"It's about keeping national politics out of local government. It's a bit strange."

Standing on some sort of ticket, though could be helpful, as it "immediately says things to a voter about what candidates support, and what they reject".

"You can't know everybody personally, and any of these kind of clues can be helpful."

Tickets had been successful in other cities, where candidates had grouped together.

"I think that's one thing candidates will think about: what is your message going to be for the voter?"

Most people spoken to yesterday thought groupings were increasingly likely.

Cr Walls, who has yet to declare his hand for the coming election, said groupings were "inevitable" this year.

While any level of extra costs was unknown, Cr Walls said the Local Government Commission had noted television, radio and newspaper advertising for candidates was already city-wide, and would not make a lot of difference.

But Cr Walls said he had distributed pamphlets to what was the Hills ward, something that would cost more if he were to do it across the new city ward.

For new candidate Andrew Whylie, a grouping was a definite option.

The representation review changes had affected that decision, but for different reasons.

"I'll probably be looking at a coalition with similar people."

He had already spoken to two or three people who were considering standing. Two of them, in the past, would have been alongside him in the South Dunedin ward. With four councillors allocated to that ward in the past, a coalition would have seen them competing against each other.

Mr Whylie did not think the cost of campaigning would necessarily change, with local newspapers and television covering the city.

Advertising hoardings, which may have to be placed across a wider area, would probably be the biggest change.

Another councillor from the former Hills ward, Fliss Butcher, said she was still considering how her campaign might alter, following the ward changes.

She did not see the point of social networking with blogs or Facebook sites, as people that followed them were either friends and family, or opponents.

Instead, she planned to do more "on the ground, face-to face" campaigning, on street corners or at supermarkets.

"I won't be doing door-knocking. My excuse is I don't like dogs."

Cr Butcher said she did not plan to increase her spending beyond the $4000 she spent last year, mainly because that was as far as her budget would stretch.

Asked if she was considering joining others in some sort of grouping, she joked:"Nobody has asked me."

"I would consider it.

"But I really believe you need to have your independence in there."

That was not so much for the financial benefit, but to have a support crew, particularly with what she described as "the nasties and the crazies" who were attracted to local politics.

Working behind the scenes, Greater Dunedin fundraiser Tony Crick said the group would again be looking for funding this year.

"The thing about this is there aren't many candidates who are sufficiently wealthy to put their hand in their pocket to get a $40,000 job back in return," he said, referring to a councillor's base wage.

Whether more money would be spent this year would depend on what the maximum allowed was.

Mr Crick made it clear the group wanted more than three members to wield more power at the council table.

"From our point of view, this is the critical election."

To make a big difference, "if you're on the losing side all the time", you needed more than three people on the council.

But while political groupings may be the way of the future, two councillors spoken to yesterday made no bones about their views of what they said was the resulting lack of independence.

Cr Bill Acklin said if Greater Dunedin had two more councillors, whatever Cr Dave Cull said would be supported "by his little followers".

"I wouldn't see myself getting involved in anything like that."

When any group had "x number of people on the council, then the democratic opportunities we've had up till now would start to disappear".

Cr Bezett said there were some prospective candidates who "may want to highlight their difference by standing on a particular ticket".

His view, though, was people should have done work in the community and made a name that way, instead of putting their name on a ticket and "spending a lot of money to promote themselves".

"I think strong, independent councillors are much better than a group that follow the line."

In response, Cr Cull said his group was looking for potential candidates who would "adhere to certain principles" - for instance, to be fiscally responsible, open and transparent.

"That's not to say we won't have policies."

"It's not a party thing in that regard."