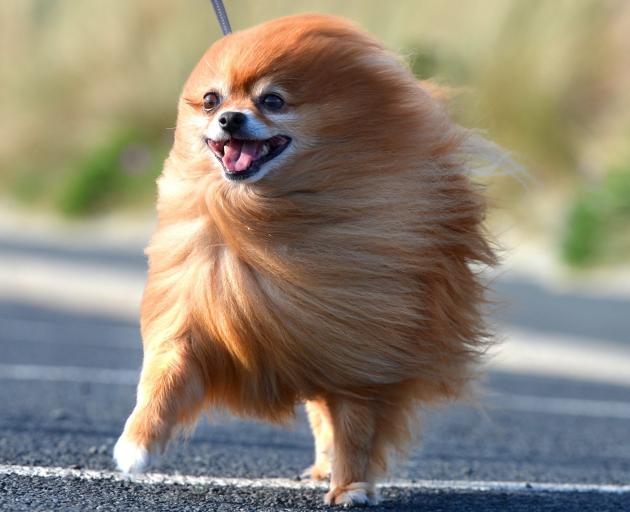 Thor the Pomeranian, pictured during a blustery day in John Wilson Ocean Dr in 2014. PHOTO: STEPHEN JAQUIERY
A Dunedin woman is devastated after watching her beloved pet of 15 years being mauled to death in front of her.

Thor the Pomeranian was well known around Dunedin for his big smile and even bigger fur.

In fact, owner Ali Grant said taking him for a walk was like being with a film star.

"People just smile and laugh and take photos every time he walks past," she said.

But a walk on the beach at Lawyers Head on Wednesday ended in tragedy.

They were wandering towards a track to leave the beach, near the rock pools, with a friend and her dog when a man and his bull mastiff dog walked along the beach towards them.

The bull mastiff was not on a leash, and it "came barrelling over in a very dominant way" to the pair of dogs, Ms Grant said.

When Thor barked at the newcomer, it pinned him down with its mouth.

Then it lifted him into the air and shook him, breaking his neck.

"He had this huge wound on his back, this dog just cleaned him up really, really quickly."

Watching it play out was horrible, she said.

The bull mastiff’s owner threw himself on his dog to get it to release Thor. He then took his dog away up the hill, before returning to cover up the blood on the beach.

As he passed Ms Grant and her friend on the track, he said, "Sorry."

That was the last they heard from him, and he never gave them any details, she said.

Thor’s death had left her devastated.

"Our whole world revolved around him.

"He lived up to his name. My son-in-law said he went out a little warrior, and he’ll be in Valhalla now."

Ultimately, Ms Grant wanted large dogs kept under control, their owners either keeping them on a leash or having their dogs well trained.