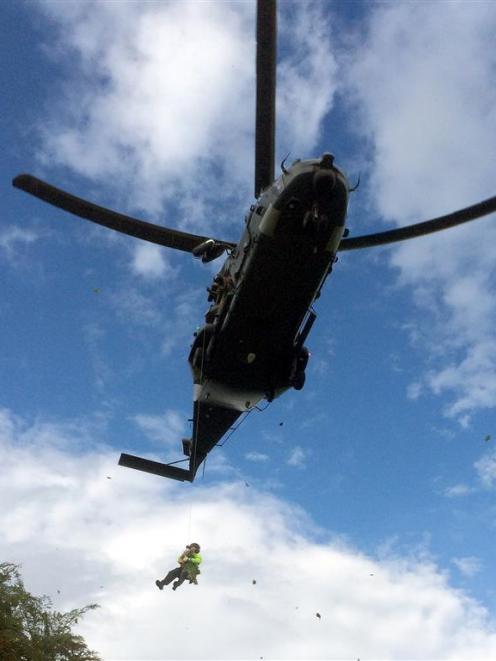 A police officer hangs beneath an RNZAF NH90 during a cannabis recovery operation over Westwood on Saturday. PHOTO: ROBERT BAXTER
Police have seized 800 cannabis plants in Otago and Southland with an estimated street value of $700,000, more than double that of last year.

Most plants were plucked from bush areas but search warrants were executed on five properties and 10 firearms were seized.

The biggest haul in the two-day operation across the South was 30 to 40 plants from one property.

The raids were part of the police's annual cannabis recovery operations.

Detective Senior Sergeant Malcolm Inglis, of Dunedin, said he was happy to get the drugs off the street but there was still ‘‘plenty more out there''.

‘‘It's not on the streets and [it would be] all untaxed income for people,'' Det Snr Sgt Inglis said.

‘‘If you break it down to tinnies, it would be worth a lot.

‘‘It's good to see it not reaching the streets.''

As the investigation was ongoing, no arrests had been made yet, Det Snr Sgt Inglis said.

Police used a Royal New Zealand Air Force NH90 helicopter to assist in ‘‘pulling'' plants from the ground and officers were winched down to plots.

Police targeted areas in the region where cannabis was known to be growing but Det Snr Sgt Inglis would not go into specifics, although a helicopter was photographed operating above Westwood on Saturday.

No changes had been made to cannabis recovery operations in the wake of the shootings of four police officers on a drugs operation near Kawerau, in the Bay of Plenty, on March 9.

'‘We are always assessing risks and changing how we do things.''

There was always risk involved in any operation of this nature,'' he said. ‘‘Staff are always aware and vigilant.''

Cyanide was used to keep rodents away from plants.

Cannabis cultivation in the region was the work of gangs and individuals, he said.

The Guardian newspaper in Britain reported on Thursday a ‘‘cannabis crisis'' had taken hold in New Zealand as supply was ‘‘almost unattainable''.

Det Snr Inglis dismissed the claim for this region saying people had ways and means of growing it and a lot was being discovered indoors.

Det Snr Sgt Inglis said methamphetamine was the ‘‘number one'' drug problem in Dunedin at present.