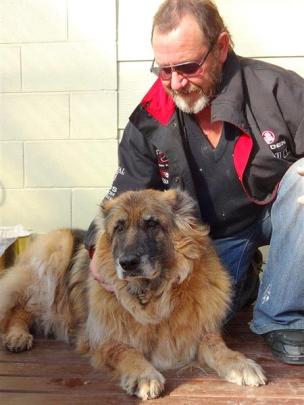 Sasha the German shepherd has a new home with Robin Laing at the Waikouaiti Tavern and Motels, after her owner, Stuart Tikey, had to go into care. Photo by Bill Campbell.

Sasha, the German shepherd who moved with her owner's car to the Goodwood kennels in June, has found a new home.

When ill health meant Sasha's owner, Stuart Tikey, could no longer look after her, the long-haired dog and Mr Tikey's car - the only place Sasha would settle - moved into the Goodwood Kennels yard.

Kennel co-owner Clare Wellington was asked by Mr Tikey's family if she could help find a new home for Sasha.

The Wellingtons spread the word that Sasha needed a new home and a local dog owner approached Waikouaiti Tavern and Motels owner Robin Laing one day as he walked his own German shepherd on Waikouaiti Beach.

Mr Laing went to see Sasha within the hour.

''It was requited love at first sight, with big hairy hugs all round,'' Mrs Wellington said.

Later the same day the Wellingtons took Sasha to visit her new admirer at his home.

''She was right at home [and] she's a natural, greeting visitors at the entrance to the tavern, charming everyone and accepting affection everywhere,'' Mrs Wellington said.

''It is very close to a fairy tale ending for the lovely, big, hairy, sad car-dwelling dog.''

Like Mr Tikey, Mr Laing is a former mechanic who is restoring an old car. He said he spent a lot of time in his garage, where Sasha was ''very much'' at home.