Carousel in trouble for overcrowding again 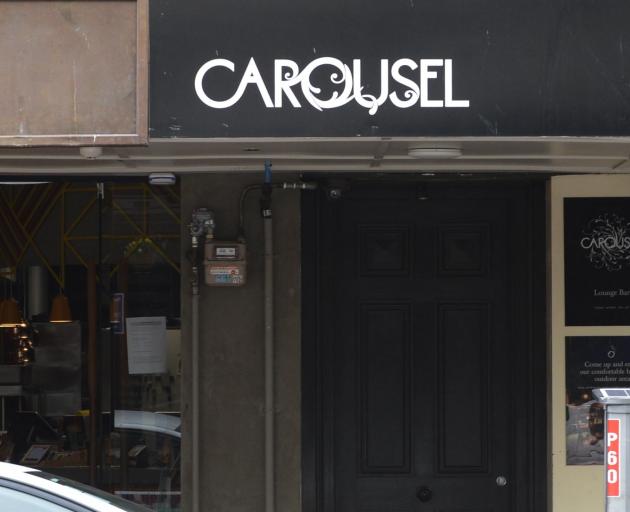 Carousel will close for a week. Photo: ODT
Two Dunedin bars have had their licences suspended after running afoul of liquor licencing laws - and one has been warned another breach could mean it loses its licence for good.

Eastern Lights Limited, which owns Stuart Street bar Carousel, has had its on-licence suspended for a week after police found an uncertified doorman allowed the bar to become overcrowded.

The bar's owner, John Devereux, has also had his manager's certificate suspended for 42 days, as police say they have "reached the end of the road'' with his ability to manage the premises properly.

It was the second time the bar has been pinged for overcrowding this year. In April its licence was suspended for 72 hours.

At an Alcohol Regulatory and Licensing Authority (ARLA) hearing in Dunedin on October 8, police alleged the bar exceeded its maximum number of occupants on Sunday, July 28.

The capacity of the bar is 50 people. Officers found about 60 people in the bar, while the doorman's counter indicated 72 patrons.

Inquiries by alcohol harm prevention manager Sergeant Ian Paulin found the doorman did not hold a certificate to hold the position.

Mr Devereux told police the incident was a result of a doorman "blatantly not doing their job'', and he suspected he may have been drinking.

At the hearing, Sgt Paulin said the incident had "disturbing similarities'' with the bar's previous overcrowding incident.

Police had reached "the end of the road'' in terms of Mr Devereux holding a manager's certificate, and he had proven "he cannot manage the premises in a satisfactory manner'', Sgt Paulin submitted.

The Authority found the breach was a result of system failures, rather than a one-off incident.

It also warned those systems, as well as staff and training, would be the subject of "intense scrutiny'' if they applied to renew their licence in November next year.

Meanwhile, another St Andrew Street bar Branson's has had its licence suspended for six days, and its manager's certificate suspended for 28 days, after serving an intoxicated patron.

It was also warned that a further breach within three years will result in an application to cancel its licence altogether.

At a hearing, also in Dunedin on October 8, police submitted that at 2pm on July 25, police were called to a disturbance involving three intoxicated males outside Farmers.

Constable Max Holt said he knew of two of the males to be chronic alcoholics, but he did not know the third man.

Their speech was slurred, and they smelled strongly of alcohol, he said.

They were also unusually loud, used offensive language, were socially uninhibited and staggered and bumped into him and each other as they walked down the street.

When he was able to identify the third man, he found he was on bail and one condition of his bail was that he not drink alcohol.

While police were making enquiries about the incident, the men entered Branson's.

When police entered the bar, they found the three men each had a jug of beer.

The man on bail was arrested for breaching his conditions.

The bar manager Nicola Muir, told the Authority she believed the man had consumed "a few drinks'', but not enough for him not to be served.

The Authority found the decision to serve the man was "inappropriate'', and could have been easily avoided.