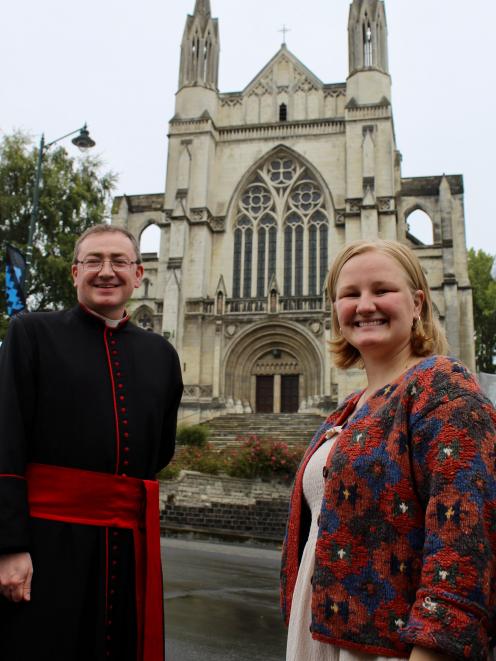 The service, on Sunday, March 27, is being organised by Student Christian Movement Otago and St Paul’s Cathedral.

Member Rachel Dudley-Tombs said as a queer Christian there was a lot of pain that existed at the intersection between queerness and the Christian church.

"We wanted to offer something that was a space to celebrate queerness and queer people who still have some kind of spirituality."

It was a "big call’ for the group to organise a queer church service at the cathedral.

"There’s all kinds of reasons why queer people don’t want to come to a service or don’t feel comfortable in a service or, you know, have moved away from seeing the church as a safe space."

So being able to offer a queer service as part of Dunedin Pride month was "really cool", she said.

Many had been burned "pretty hard" by decisions made by church institutions, even though it had been at the top of the debate agenda at national church meetings for about 50 years.

She grew up in Belfast in Northern Island, and had a positive experience going to church as a child, Ms Dudley-Tombs said.

"I always went to church growing up, and I really was significantly shaped by the youth leaders that I had when I was a teenager."

When she was about 17 the Presbyterian Church in Ireland started to make some backwards steps around queer inclusivity, including saying people were not eligible for communion if their parents were queer.

Being excluded from the central point of the faith, which was the communion - "the meal with Jesus at the table" - felt like the church was "going really into the Dark Ages".

Arriving in Dunedin at 18 and seeing a rainbow flag outside Knox Church was "really exciting".

There were a number of churches that were inclusive of queer people but it was still not the majority.

"I think part of the challenge is decision-making processes in churches do not usually include queer people."

What seemed to change people’s hearts was when people met someone who was queer and had a faith, she said.

"From a Christian perspective, everyone has gifts and everyone has been made by God in a way which is wonderful and to be celebrated."

Having a queer service at St Paul’s Cathedral would be wonderful.

"In terms of having this kind of service, I can’t think of a better place in the middle of the city at the cathedral. It is just so fantastic to mark that on the map."

If someone was to look at the governing body of the cathedral about 50 years ago, practically everybody would have been an older white man, he said.

It was fantastic to be able to celebrate together and he hoped the queer service would become a fixture of future Dunedin Pride activities.

"Being right in the middle of the Octagon, we can say you know, this is who we are, this is what’s important to us and everybody is welcome."

• The Queer Evening Church Service at St Paul’s Cathedral is on Sunday, March 27 at 7pm.