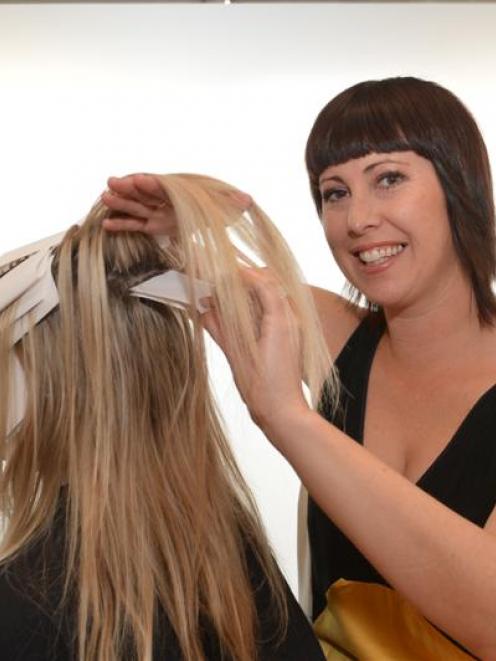 Scott Base colourist Amanda Buckingham uses her new biodegradable hair product, made from rock paper, on client Brittney Townsend's hair. Photo by Stephen Jaquiery.
An environmentally conscious Dunedin hairdresser is on the verge of signing an international contract for a hair product she dreamed up while making school lunches.

Director and colourist at Caversham hair salon Scott Base Amanda Buckingham came up with the idea for a biodegradable alternative to aluminium foils used to dye hair, after looking for ways to make her and her husband's salon more environmentally friendly.

''I looked in the rubbish bins and I was like, `Man we use some tin foil','' Ms Buckingham said.

After failing to find any alternatives on the market, she gained the inspiration while making school lunches for her children.

''I looked in the drawer and saw baking paper and I thought: `I wonder what that would be like?'.''

After two years of product development, with the help of Otago Polytechnic's innovation workSpace, she settled on a product called ''One Systema'', made from a biodegradable paper product made from rock, with the word ''One'' coming from the Maori word for soil and sand, not the number one.

She is now on the verge of signing a potentially ''multimillion-dollar'' contract to license the product to either one or multiple international distribution companies.

She attributed her success to a determination to see things through and the ''amazing'' amount of expertise on hand in Dunedin, and the rest of New Zealand, to help develop the product and pitch it to the world.

''What it has proved is that New Zealand [and Dunedin] have the resources to be successful. We sometimes think we are not big enough to take on a global contract, but the work we produce here is amazing.''

The journey to get One Systema to the market had taken her to Europe where she pitched the product last year.

She was now ''100%'' certain it would reach salons - hopefully by this spring - with negotiations well under way.

It was now just a case of the ''big boys nutting it out'', she said.

''One of the things I was told when the Italians were testing it was that their product tester is one of the most [thorough] people you could ever meet ... but he had nothing negative to say.''

Developing the product, which had been used in her salon for 16 months, was not about ''getting rich'', but instead about reducing the carbon footprint of the hairdressing industry.

''The coolest thing about it is it's non-tree-felled, there are no chemicals used in its production and I can't find anything like it.''

Research showed making the product used only about 3% of the energy used making foils.

Once a contract was signed, Ms Buckingham planned to continue working in her salon and had three other ideas for products she was keen to develop.

''You cannot imagine how much aluminium foil gets saturated in hydrogen peroxide wrapped up in a ball ... and put into the earth and how poisonous [that is].

New Zealand hairdressers on average went through 1000m of aluminium foil a month.

''It's crazy. There is this huge environmental problem around hairdressing which no-one is talking about,'' she said.