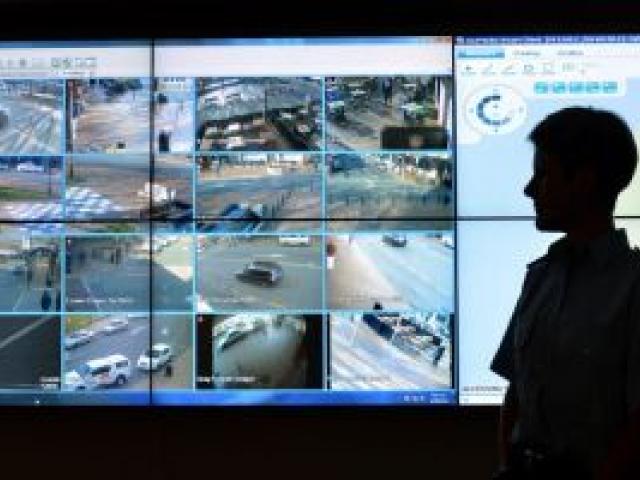 Inspector Mel Aitken watches CCTV footage from the Octagon at the District Command Centre in Dunedin yesterday. Photo by Stephen Jaquiery.
The eyes of the law are expanding across Otago.

Oamaru's first CCTV network could be operating next month, and in Dunedin, police are in talks about adding more cameras.

The Waitaki District Council will install up to eight cameras at hot spots in Oamaru and their number could eventually double.

The cameras will feed to the Oamaru police station and be monitored on Friday and Saturday nights by trained volunteers.

At other times, footage will be recorded.

Cameras would give police extra sets of eyes.

Any savings to the council from less vandalism would benefit the community.

But CCTV would not be the ''be all and end all'' of crime fighting.

Det Duncan had researched CCTV use in other areas such as Timaru and Queenstown.

In Timaru, the cost of vandalism fell by about $200,000 within a year of CCTV being installed, he said.

The cameras have long been discussed for Oamaru, but costs were too high.

Council community safety and development facilitator Helen Algar said the idea was revisited with the development of cheaper technology.

A council commitment of $20,000 and significant volunteer and community contributions, including time and expertise, was bringing the $60,000 project to reality.

"We will start with one or two units and, with support, it will grow over time to the full complement of 16,'' Mrs Algar said.

She said she hoped the first unit would be in place by September, but it was a complex task and several factors would determine the time frame.

The CCTV network will monitor traffic flow in and out of Oamaru.

Cameras will be placed high enough to prevent vandalism but low enough for a good view of traffic, and painted to fit in with surroundings.

Mrs Algar said they would not impinge on the public's privacy.

The cameras went live in November 2010 as a part of a joint safety project between the Dunedin City Council, police and the Ministry of Justice.

Inspector Mel Aitken confirmed police were in talks with the council, ''just to ensure we have them in the right places and whether there is the opportunity to increase them in the central city''.

''This is all about keeping Dunedin safe,'' the Dunedin Clutha Waitaki area prevention manager said.

The city has 14 cameras, including a number plate recognition camera, in the Octagon.

The cameras had helped in arrests, but were primarily used for crime prevention.

''It means we can identify hot spots where trouble might be brewing, and deploying staff there before any action takes place,'' Insp Aitken said.

''They are a great prevention tool.''

More cameras would be ''fantastic''.

George St, as the main pedestrian thoroughfare and a popular late-night eating spot, was a possible option, she said.

''If we had the capacity to put them in other places that attract people, then that is where we would like to see them.''

Police and council will also investigate if more signs are needed to raise awareness of the cameras.

The existing camera system cost $205,000, was manned by volunteers during peak times and overseen by police officers.

DCC liquor licence project officer Kevin Mechen said official costings for the cameras were yet to be made.