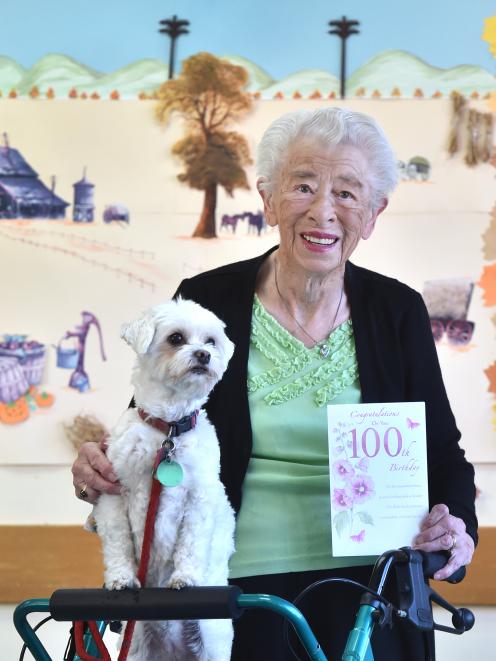 Muriel Barbara and her dog Mella get ready to celebrate her 100th birthday. Photo: Peter McIntosh
For Muriel Barbara, 100 is just a number.

Mrs Barbara passed that milestone today, but it only meant so much.

Her age does mean she has quite a lot of cobbers.

Born in 1919 in Lawrence, she was schooled in the town and spent her early life there.

She married Anthony Barbara in 1946 and the couple moved to Dunedin.

After her husband's death she found work ''where I could get it''.

That included everything from working in a bakery and a cake shop to doing knitwear and working at Cadbury's.

There had been a lot of changes over her lifetime.

Early on she had no telephone, no car and ''never had anything much''.

She remembered when entertainment was a trip to the circus and children had to walk to school rather than be driven.

In Lawrence, as a younger woman living just out of town, she ''had a great time'' going to dances and playing hockey.

The key to getting to that age was to eat well and sleep well.

She had played a lot of sports, including hockey, and skating when she was in Lawrence.

The love of sports went through her whole family, which kept her busy.

For her birthday, she said she wanted to ''run to the bush''.

That was unlikely to be an option, however, as celebrations had already started.

There was a dinner planned last night, a birthday lunch and tea today and a gathering of more than 100 family and friends on Saturday.