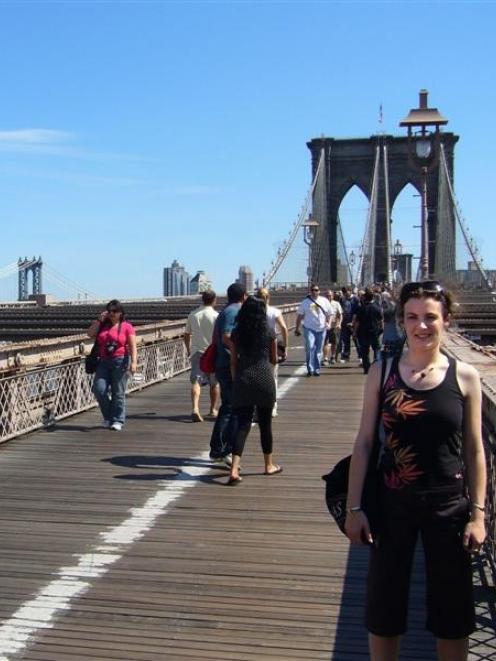 Irene Ballagh takes in the views from Brooklyn Bridge.
When Irene Ballagh says there are some amazing people at Columbia University, she is not exaggerating - a Nobel Prize winner works just down the hall from her lab.

The former Otago Girls High School pupil is in New York city on a Fulbright Scholarship and working towards a PhD in neurobiology, studying courtship behaviour in frogs.

Is she doing what she thought she would be when recognised with an Otago Daily Times Class Act award in 2001?

"Pretty much," she says.

"I'm still the science geek, trying to understand everything."

Ballagh (24) moved to Manhattan a year ago after graduating from the University of Otago with a bachelor of science (hons) degree, majoring in neuroscience.

Last year, she was one of only 27 students in the world to receive a Fulbright International Science and Technology Award.

The programme was launched in 2006 to encourage talented international students to complete PhDs at US universities.

More than 70 countries were asked to nominate one or two top students for consideration.

Providing fees, a living stipend and various allowances, the scholarship allows Ballagh to work with people at the top of their field and obtain her degree in a first-class university without financial concerns.

It has also meant a complete change of scenery.

"I love the amount of stuff going on here", she says.

"Everything's 'on' all the time. There are always people doing interesting things, and the resources for doing research are beyond amazing.

"On the other hand, there are no hills and the closest you get to nature is a sculpted park or the nearly-tame squirrels of the uni campus. That gets a bit hard to take sometimes."

Columbia has 80 faculty members in neuroscience, compared with 15 or 20 at Otago, she adds.

"That means there's a wider range of research and so more people to work with or to ask questions of.

"There's also more money, which means all the complicated cutting-edge technologies - fMRI machines for imaging human brains, confocal and two photon laser-based microscopes that can look at neural structure and activity on a tiny scale - are more common and more available for use than in New Zealand."

Research using transgenic organisms is more advanced, and several new genetic tricks that can be used to identify, label and manipulate parts of the brain are regularly used at Columbia.

One involved in this is that man who has his office down the hall from Ballagh's lab.

A recent recipient of the Nobel Prize in Chemistry, he invented the technique of using glowing jellyfish protein to label neurons.

In Ballagh's case, it is the South African frog Xenopus laevis under the microscope.

"When frogs sing, they must listen and then respond appropriately to calls made by other frogs," she says.

"I'm trying to use fluorescent dyes to trace the neural connections that allow them to make the appropriate response to what they hear.

"I'm also interested in how hormones produced in the brain and the rest of the body influence how those neural circuits are connected and how active they are, and thus how the hormones influence the frog's behaviour," she says.

Understanding how hormones work in the brain to change social behaviour in a simple system like a frog brain - which is only 1cm long and 4mm wide - will be the first step in understanding how they might shape human behaviour and emotions.

It sounds complicated, but Ballagh says doing an Otago degree, particularly the honours year, which required her to complete a research thesis while attending advanced classes, writing assignments and doing exams, was "great preparation" for everything she has encountered since.

With five more years of study ahead of her, she is not making any plans beyond getting through her PhD.

Once that is done, her visa will require her to return to New Zealand for at least two years.But already she has learned that it is surprising what will grow on you, if you give it a chance.

Always against going to the US to study, she fell in love with New York on her first morning there and found that for all the crowds, noise and smells, it was somewhere she enjoyed living.

"I've been stopped on the street by transvestites doing Tina Turner renditions, seen kids breakdancing in subway cars, had Brad Pitt and George Clooney filming up the road, and had to dodge runners in the NYC marathon.

"It's famous for being the least friendly city in the world, but the lovely woman in the apartment next door occasionally insists on folding my laundry for me because she wants to look out for her neighbours."

She also watched celebrations in the neighbouring suburb of Harlem on the night Americans elected their first African-American president.

"It's an amazing place for so many reasons."