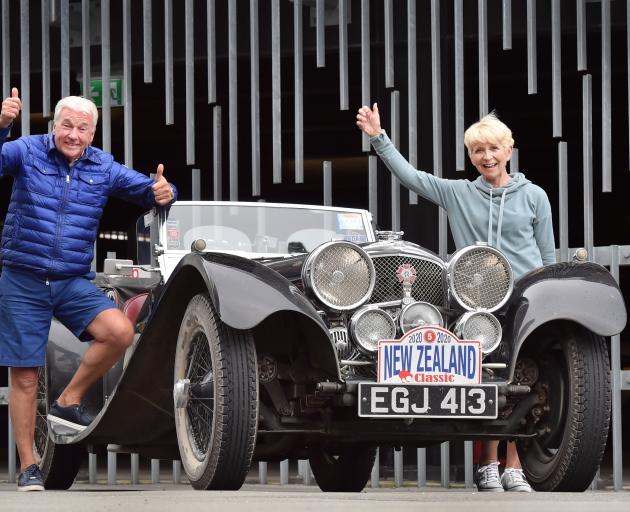 Pit stopping in Dunedin in their 1937 Jaguar SS100, worth $1.3million, are Stephen and Collette Owens, of York, England. PHOTO: PETER MCINTOSH
Some of the most expensive cars in the world pit-stopped in Dunedin yesterday.

The trip, which started in Auckland on February 15, will cover 7000km and finishes in Christchurch tomorrow.

Businessman Stephen Owens and wife Collette are taking part in their 1937 Jaguar SS100, worth an estimated $1.3million.

Mr Owens said the 2.5-litre car had encountered some issues while rallying with wife Collette as navigator.

"We’re running with an original engine... everything in the car is original so it takes a huge amount of work to keep it up to a running standard."

Some issues the car had included a blowing manifold and ignition not working, but the dedicated team of mechanics paid to accompany the group on the trip had been priceless.

"It’s a dying industry, mechanics who can work on old cars."

Driving the Motu Rd in the North Island had been a highlight, Mr Owens said.

"You’re on a road that is one car width and trying to keep up with the regularities, it’s thrilling.

"We’ve had the doors fly open, the car is uncovered, you’re battling against the elements and that’s part of the fun."

Architecture across the city and the Railway Station had been the highlights of their short stay in Dunedin.

"It’s beautiful, the city is so well-preserved."

The cars leave the city this morning and head to Lake Tekapo, before ending the trip in Christchurch tomorrow.