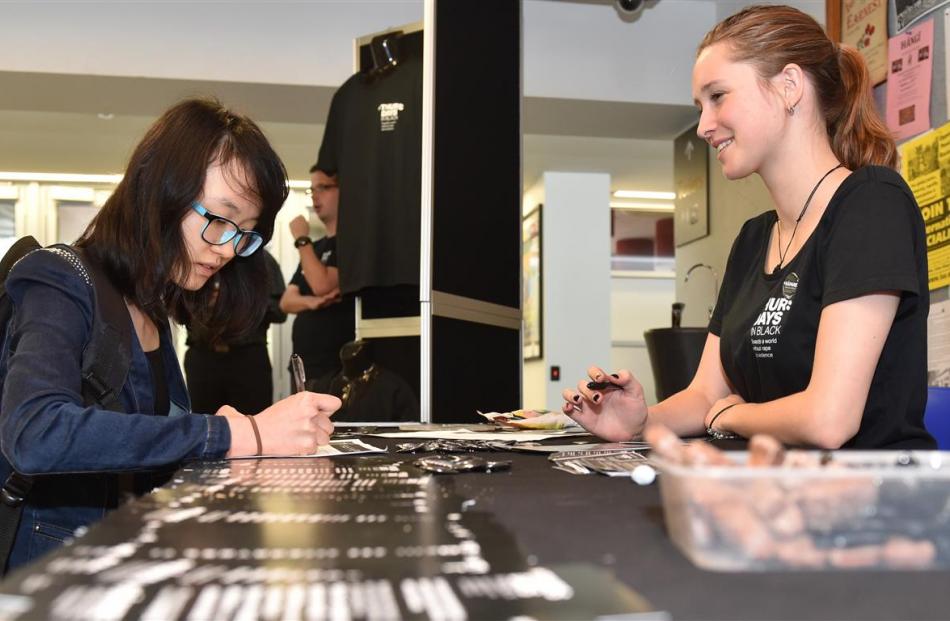 Student Qiao Zhang signs on for Thursdays in Black, a campaign against sexual violence, as Ella Williams looks on. Photo by Gregor Richardson.

Sexual consent is a big issue in Dunedin, one the Otago University Students' Association plans to make progress with through an education campaign.

OUSA welfare officer Bryn Jenkins said consciousness of the issue was such he had spoken to "butch men'' wondering how to act on a night out.

With second-year students at Otago turning up too often in statistics in terms of consent issues, there were plans to take messages directly to halls of residence this year.

The OUSA was yesterday signing up students to its Thursdays in Black campaign against sexual violence.

"It's being launched up and down the country.

"I think every major university has picked this up.''

Mr Jenkins said it was a relaunch of Thursdays in Black, which had been around for about 20 years, but this year with a theme specific to issues faced at Otago.

In Dunedin, the OUSA executive had been discussing targeting consent and alcohol consumption, "ss that seems to be a large problem with Dunedin nightlife''.

The programme itself was an awareness campaign, but this year with an education element, "getting into halls and giving students greater clarity, greater information, knowing their responsibilities, making sure they're safe''.

"Second-year students, once they're out of the halls, are disproportionately represented in the issues the university has.''

Consent was "a very topical thing at the moment - it's popping up all over the world'', Mr Jenkins said.

"It's about creating a greater level of respect in the way we conduct interactions with each other.

"People need to be aware it's not your right to go and just sleep with whoever you want.

Students signing up yesterday were given an option to indicate whether they were just interested in information, or joining a core group.

"We're going to be offering intensive training to those in our core group.''

The group would run the programme.

"We want to get it off the ground as soon as possible.

"Our purpose today is to get volunteers and get people involved, because we want this to be student-driven, not necessarily executive-driven.

"We want fresh ideas, we want good enthusiasm from people.''